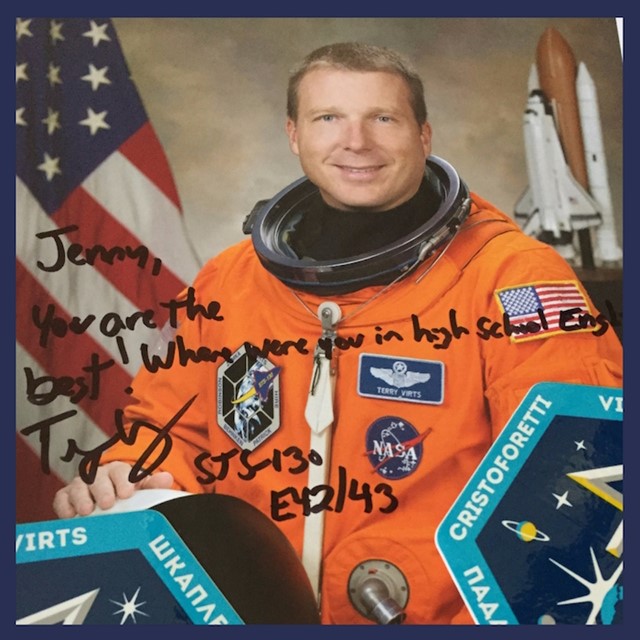 When we heard Terry Virts say those words in our classroom at The Buckley School, we realized it was the first time we’d ever worked with a speaker who was using them literally.

Terry is an astronaut and was commander of the International Space Station. He’s spent more than 200 days in space. He holds the distinction of having taken more photos from space than any other astronaut.

He’s also a popular speaker, with incredible stories to tell. Our task was to help him use those stories so that they illustrate what he’s learned about leading teams, cooperating, taking risks and responding to the unexpected. As you might expect, commanding a space station with an international crew for seven months will teach you important lessons about all that and more.

Our guidelines for using stories seemed to work for Virts:

When you have dozens of fantastic stories you could tell, let your purpose be your guide. Choose the ones to help you make your points. (As one friend of the school likes to say, fill in the blank: “I’m telling you this because ___________.”

Use details to paint a picture—but use the relevant details. For Virts, this was especially important, because details are critical to surviving in space. But too many details can bog a story down. Get specific about the things that help you drive the story forward.

Recognize that you can tell the same story in several different ways, depending on the interests of your audience and your reason for using the story.

In Virts's case, we were tempted to make a concession: Some of his stories were so darned interesting that we wondered if we could give him a pass. Go ahead. Tell us about cutting your hair in space, clear purpose or not.

But our guideline held true, even for the astronaut. When the fascinating story ALSO had a purpose, it was even more compelling as part of a speech.

You may have a chance to hear Terry speak in person. He’s on a book tour this month with National Geographic Live to promote View From Above: An Astronaut Photographs the World, his book of photos and stories from space.

You can find dates for Terry’s tour here , follow him on Twitter and Instagram or see him and his footage in the IMAX film narrated by Jennifer Lawrence, A Beautiful Planet.

And here’s video of Terry telling some of his stories to a group in Australia. It includes footage from the space station (watch for the taco!) and concludes with his story of how he became an astronaut, a good one if you need a little inspiration to go for what you want.