On This Day: I've Been to the Mountaintop 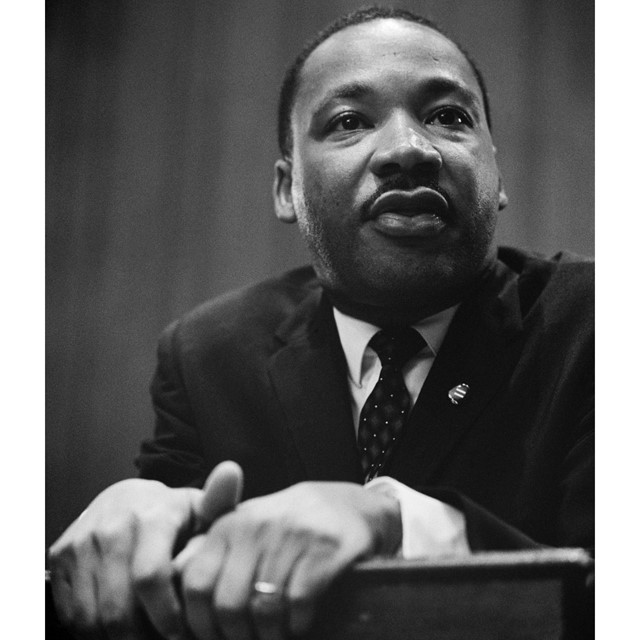 "Well, I don't know what will happen now. We've got some difficult days ahead. But it doesn't matter with me now. Because I've been to the mountaintop. And I don't mind. Like anybody, I would like to live a long life. Longevity has its place. But I'm not concerned about that now. I just want to do God's will."

– Martin Luther King, Jr. in his "I've Been to the Mountaintop" speech

A thunderstorm outside. A restless crowd inside, at the Mason Temple where people had been waiting 90 minutes for the arrival of the speaker they revered.

A speaker who was tired, losing his voice—and delayed leaving the Atlanta airport because the plane's cargo had to be inspected again after threats to his life were made.

On April 3, 1968, Dr. Martin Luther King, Jr. gave a 43 minute speech in Memphis, Tennessee. The next day, he was assassinated on the balcony of the Lorraine motel.

This, his last speech, is often called the “I’ve Been to the Mountaintop” speech, because of the powerful, poignant closing lines King uses.

A King speech, though different this time

As in his other speeches, King uses familiar techniques. But according to many who witnessed it, this speech had a more intense and passionate tone, one they say reflected King’s growing fear for his own life.

In his book, Redemption: Martin Luther King Jr.'s Last 31 Hours, Joseph Rosenbloom describes the speech and the events leading up to it. He writes:

There had been no time to prepare, even if he had intended to do so.

King often spoke without notes, even when the stakes were extremely high. He was doing it again on this night. He had an astonishing knack for speaking off the cuff. He seemingly had a photographic memory.

As he concluded his speech at Mason Temple, he seemed to be coming to terms with death to an extent that he had not voiced publicly before.

King’s voice rose to its highest pitch yet. His eyes blinked rapidly, as he turned his head from side to side. He acknowledged that he wanted to live a long life but that he was resigned to whatever might happen. He said that God had allowed him to reach the mountaintop and see the Promised Land.

Then he vowed resolutely, nobly: "I may not get there with you. But I want you to know, tonight, that we, as a people, will get to the Promised Land!"

Rosenbloom notes that King knew his Biblical references would appeal to this audience and that he also had a an ease in using them. He’d grown up memorizing Bible verses and reciting them at the dinner table, grown up hearing his father, a minster, preach many sermons. As a theology student, King had studied preaching styles—and sometimes entertained his aides with impersonations of various preachers.

Timeless lessons from an inspirational leader

In addition to admiring the speech and the man who gave it, here are some things we can note and use in our own speaking:

Searching for the speech in full

Though audio recordings of the full speech exist, film of it has been hard to come by.

One of the filmmakers working on the documentary series Eyes on the Prize described the struggle to find film snippets that would allow them to assemble the speech. Some of the footage was misfiled in boxes, other bits rescued from the trash.

Here’s an annotated text of the speech, the full audio recording and below, footage that show’s King delivering the powerful close.