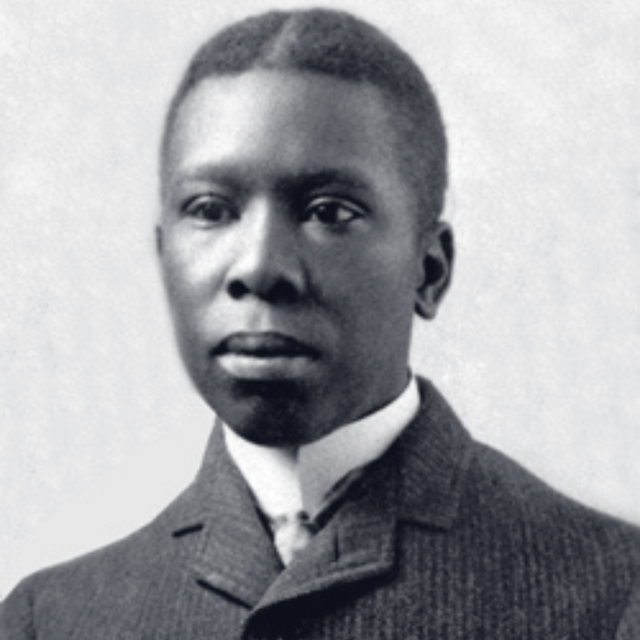 The Buckley School's founder believed that all public speakers should hone their presentation skills by reading poetry out loud. We keep that worthwhile practice alive by including a poem in our magazine each month for you to read aloud. Above, Paul Laurence Dunbar photographed when he was around 18 years old.

"A plea, that upward to Heaven he flings— I know why the caged bird sings!"

– From the poem "Sympathy" by Paul Laurence Dunbar

Dunbar was born in 1872 to Joshua and Matilda Murphy Dunbar, freed slaves from Kentucky. Their stories of plantation life would provide material for his work throughout his life. In high school, Dunbar was an outstanding student and also edited the Dayton Tattler, a newspaper published by his friend and classmate Orville Wright. (He would remain friends with the Wright brothers throughout his life.)

Unable to afford college, Dunbar worked as an elevator operator and continued writing. He caught the attention of poet James Whitcomb Riley in 1892 after reading poems at a meeting of the Western Association of Writers.

Dunbar self-published a collection of poems the following year. To help pay for printing costs, he sold the book for a dollar to people riding his elevator.

Later that year, he moved to Chicago and was befriended by Frederick Douglass, who helped him get a job and promoted his work as a writer. Over the next few years, Dunbar’s reputation as poet grew and by 1897, he was known nationally and internationally. He made a six-month tour of England to read his work, then returned to live in Washington, D.C. and work at the Library of Congress.

Suffering from tuberculosis, Dunbar believed dust in the library was making his condition worse. He left his job and dedicated himself full time to writing and giving readings. Though quite sick for many of these years, he continued to produce works and secure his status as one of America's leading poets. Dunbar died at his mother's home in Dayton, Ohio, in 1906.

The title of Maya Angelou's autobiography I Know Why the Caged Bird Sings is a line taken from Dunbar's poem "Sympathy." Dunbar's wife, writer Alice Dunbar Nelson, said the image of the caged bird was inspired by the iron gratings of the bookstacks in the Library of Congress.

Here's a poem by Dunbar for you to read aloud:

It's all a farce,—these tales they tell
About the breezes sighing,
And moans astir o'er field and dell,
Because the year is dying.

Such principles are most absurd,—
I care not who first taught 'em;
There's nothing known to beast or bird
To make a solemn autumn.

In solemn times, when grief holds sway
With countenance distressing,
You'll note the more of black and gray
Will then be used in dressing.

Now purple tints are all around;
The sky is blue and mellow;
And e'en the grasses turn the ground
From modest green to yellow.

The seed burrs all with laughter crack
On featherweed and jimson;
And leaves that should be dressed in black
Are all decked out in crimson.

A butterfly goes winging by;
A singing bird comes after;
And Nature, all from earth to sky,
Is bubbling o’er with laughter.

The ripples wimple on the rills,
Like sparkling little lasses;
The sunlight runs along the hills,
And laughs among the grasses.

The earth is just so full of fun
It really can't contain it;
And streams of mirth so freely run
The heavens seem to rain it.

Don't talk to me of solemn days
In autumn's time of splendor,
Because the sun shows fewer rays,
And these grow slant and slender.

Why, it's the climax of the year,—
The highest time of living!—
Till naturally its bursting cheer
Just melts into thanksgiving.

As a young man, Dunbar was photographed by the daughter of his high school principal, Josephine Watkins Lehman. You can see some of those wonderful portraits here.

Learn more about Dunbar's life in Dayton, Ohio, and how you can visit the house there that he purchased for his mother and lived in until his death.

Read more about Dunbar's inspiration for the "caged bird" here.