Poem to Read Aloud: A Muse for Working People 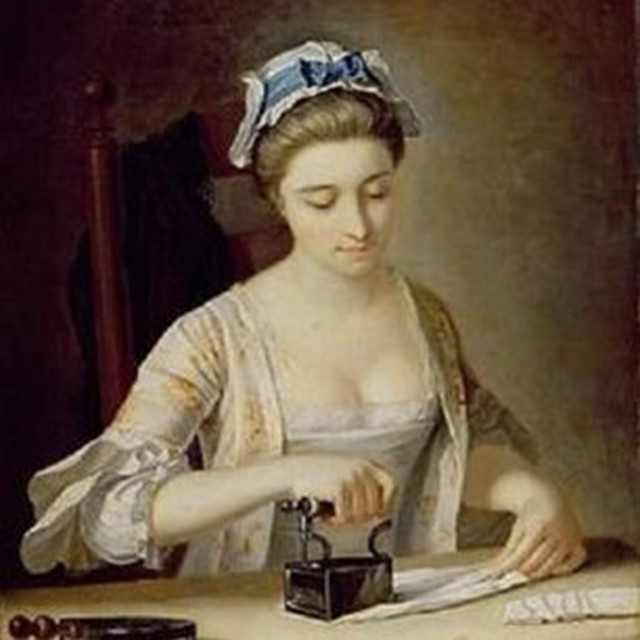 The Buckley School's founder believed that all public speakers should hone their presentation skills by reading poetry out loud. We keep that worthwhile practice alive by including a poem in our magazine each month for you to read aloud. Pictured above, "A Laundry Maid Ironing" by Henry Robert Morland (1719-1797), circa 1765-1782. Licensed under Creative Commons, The Tate Gallery.

"A servant write verses!" says Madame du Bloom. "Pray what is the subject – a Mop or a Broom?"

– from a satirical poem by Elizabeth Hands

English poet Elizabeth Herbert was born in 1746. She worked as a domestic servant and acquired the name "Hands" through her marriage to a blacksmith. She gave birth to a daughter in 1785. And very little else is known about the woman who used the pen name "Daphne."

When her poetry appeared in a local publication, it caught the eye of Thomas James, who was headmaster of Rugby School. He searched out Daphne and in 1789, he arranged for the school to publish a collection of her poems. A number of prominent people subscribed to the publication, and it was reviewed in several important literary journals.

Her poems range from blank verse on serious topics to rhyming satirical lines. One piece, "A Poem, on the Supposition of an Advertisement appearing in a Morning  Morning Paper, of the Publication of a Volume of Poems, by a Servant Maid," mocks the attitudes that Hands expects others to have about her poems. British historian Carolyn Steedman describes that poem as "intentionally offensive, and wonderfully so."

Below for your read-aloud practice, a poem by Hands with sharp observations that are still on target today:

On An Unsociable Family

O what a strange parcel of creatures are we,
Scarce ever to quarrel, or even agree;
We all are alone, though at home altogether,
Except to the fire constrained by the weather;
Then one says, 'Tis cold', which we all of us know,
And with unanimity answer, 'Tis so':
With shrugs and with shivers all look at the fire,
And shuffle ourselves and our chairs a bit nigher;
Then quickly, preceded by silence profound,
A yawn epidemical catches around:
Like social companions we never fall out,
Nor ever care what one another's about;
To comfort each other is never our plan,
For to please ourselves, truly, is more than we can.

To find a few more details on the life of Elizabeth Herbert Hands, take a look at this.

For an interesting and intensive analysis of our read aloud poem, check this out.

If you’re interested in learning more about poets like Hands who were part of Britain’s laboring class in the 1700s, The Muses of the Resistance provides their stories.