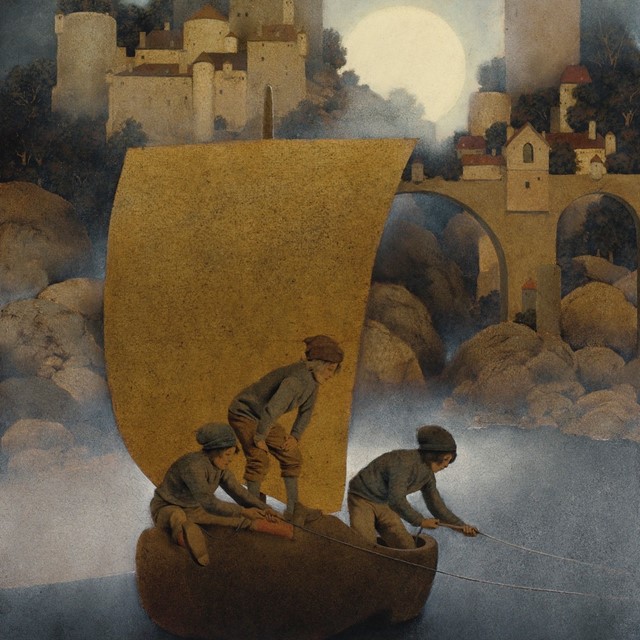 The Buckley School's founder believed that all public speakers should hone their presentation skills by reading poetry out loud. We keep that worthwhile practice alive by including a poem in our magazine each month for you to read aloud. Above, a Maxfield Parrish illustration inspired by the verse of Eugene Field.

Poet Eugene Field worked as a columnist for newspapers in St. Louis, Denver, and Chicago. He was also managing editor of the Denver Tribune for several years. He sometimes included his light verse in columns and became known as the "Poet of Childhood." Two collections of his poems for children were published in the early 1900s.

It's said that Field was a bit of a practical joker. In his office at the Denver Tribune, he had a chair for guests with a false bottom that would drop them on the floor when they sat in it.

Field was born in 1850 in St. Louis. His father, a lawyer, represented Dred Scott in the 1857 Supreme Court case to secure Scott's freedom. Field's mother died when he was just six years old, and he was raised by his aunt in Amherst, Massachusetts (arriving at the time Emily Dickinson would've have been writing poems in her family home).

Field died in Chicago on November 4, 1895, barely 45 years old. Collections of his poems would be published after his death. Among them, the popular verse we include here for you to read aloud.

Wynken, Blynken, and Nod one night
Sailed off in a wooden shoe--
Sailed on a river of crystal light,
Into a sea of dew.

"Where are you going, and what do you wish?"
The old moon asked of the three.
"We have come to fish for the herring fish
That live in this beautiful sea;

Nets of silver and gold have we!"
Said Wynken,
Blynken,
And Nod.

The old moon laughed and sang a song,
As they rocked in the wooden shoe,
And the wind that sped them all night long
Ruffled the waves of dew.

The little stars were the herring fish
That lived in that beautiful sea--
"Now cast your nets wherever you wish--
Never afeard are we!"
So cried the stars to the fishermen three:
Wynken,
Blynken,
And Nod.

All night long their nets they threw
To the stars in the twinkling foam--
Then down from the skies came the wooden shoe,
Bringing the fishermen home;
'T was all so pretty a sail it seemed
As if it could not be,
And some folks thought 't was a dream they'd dreamed
Of sailing that beautiful sea--
But I shall name you the fishermen three:
Wynken,
Blynken,
And Nod.

Wynken and Blynken are two little eyes,
And Nod is a little head,
And the wooden shoe that sailed the skies
Is a wee one's trundle-bed.
So shut your eyes while mother sings
Of wonderful sights that be,
And you shall see the beautiful things
As you rock in the misty sea,
Where the old shoe rocked the fishermen three:
Wynken,
Blynken,
And Nod.