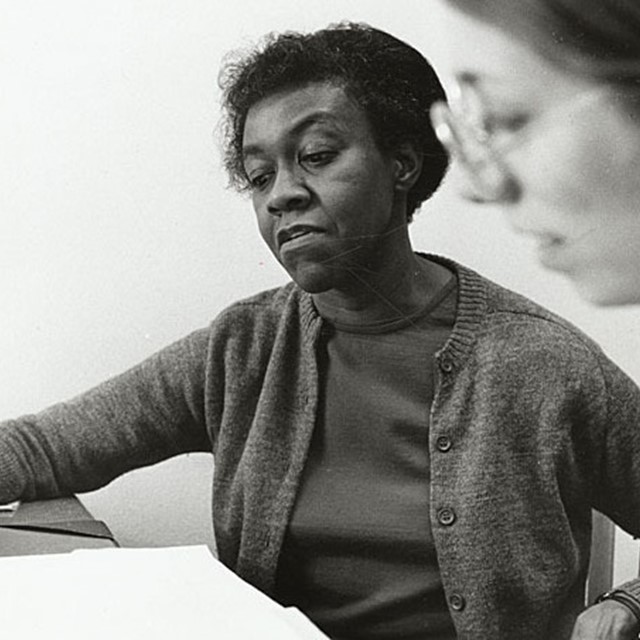 The first Black author to win the Pulitzer Prize and the first Black woman to be U.S. poet laureate, Gwendolyn Brooks is one of the most influential poets of the 20th century. She was born in Topeka, Kansas, and grew up in Chicago. She was just 13 when her first poem was published.

In addition to writing poetry, one novella, and her autobiography, Brooks taught at colleges around the country. She received a Guggenheim fellowship and was poet laureate for the state of Illinois from 1968 until her death in 2000.

"Only one who has actually lived and suffered in a kitchenette could render the feeling of lonely frustration as well as she does — of how dreams are drowned out by the noises, smells, and the frantic desire to grab one’s chance to get a bath when the bathroom is empty. Miss Brooks is real and so are her poems."

You can find more of her poems including "RIOT" and "Boy Breaking Glass" at Poetry Foundation.  And for your read aloud enjoyment, here's a a short poem by Brooks:

I shall not sing a May song.

A May song should be gay.

I'll wait until November
And sing a song of gray.

I'll wait until November
That is the time for me.

I'll go out in the frosty dark
And sing most terribly.

And all the little people
Will stare at me and say,
"That is the Crazy Woman
Who would not sing in May."

And here's Brooks herself reading "Kitchenette Building" out loud, one of the poems Richard Wright admired: