Poems to Read Aloud: A 19th Century Celebrity and Her Secrets 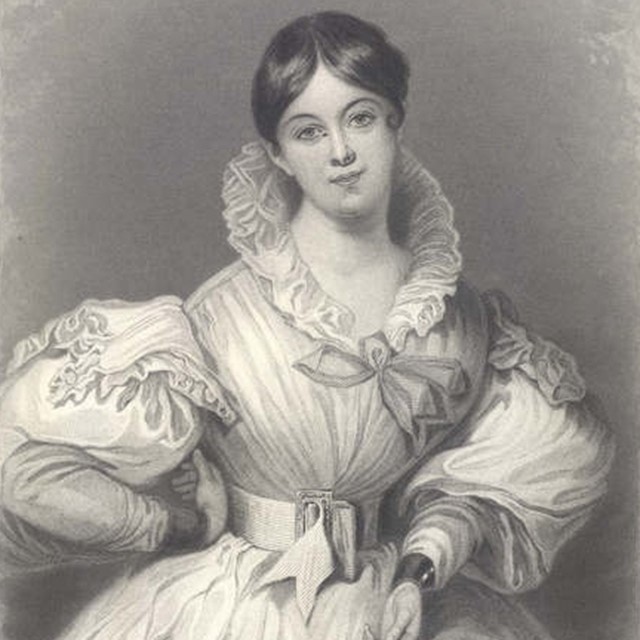 The Buckley School's founder believed that all public speakers should hone their presentation skills by reading poetry out loud. We keep that worthwhile practice alive by including a poem in our magazine each month for you to read aloud. Above, L.E.L. based on a portrait by Daniel Maclise.

"Landon explored the art of performative self-creation in the commercial press—an art fated to become a habit in the social-media age—and she was one of the first to pay its costs."

– Nicholas Dames writing in "The Atlantic"

For fans of the Netflix hit Bridgerton, Letitia Elizabeth Landon may be the perfect poet. Born in 1802, Landon was just 18 when she published her first poem.

Five years later, she was a popular writer, better known as L.E.L. to her large fan base. In 1831, she published Romance and Reality, the first of her four novels, which Poetry Foundation says "was praised by reviewers as a witty observation of modern life and cemented her status as a key figure in the literary scene."

In an article for The Atlantic, Landon is described as the 19th century version of an Instagram influencer, with a gift for generating keen interest while maintaining an air of mystery. Her personal life was the subject of eager gossip, the sort that Bridgerton's Lady Whistledown might report.

For Landon, however, mean-spirited speculation and celebrity status had dire consequences. Despite her great success as a writer, she found herself the victim of one man's cruel manipulations, then shunned by another because of rumors. When she did finally marry, she discovered her husband had another wife and family. She died of poisoning months later, speculation again coming into play as historians weigh whether she was murdered by the other wife or took her own life in despair.

Below, an excerpt from "Six Songs of Love, Constancy, Romance, Inconstancy, Truth, and Marriage" to read aloud, lines that will give your ending consonants a workout. How many ts can you manage to enunciate in your first read?

HE must be rich whom I could love,

His fortune clear must be,

Whether in land or in the funds,

'Tis all the same to me.

He must be old whom I could love,

Then he'll not plague me long;

In sooth 'twill be a pleasant sight,

To see him borne along

To where the croaking ravens lurk,

And where the earth worms dwell:

A widow's hood will suit my face,

And black becomes me well.

And he must make a settlement,

I'll have no man without;

And when he writes his testament,

He must not leave me out.

Oh! such a man as this would suit

Each wish I here express;

If he should say, — Will you have me?