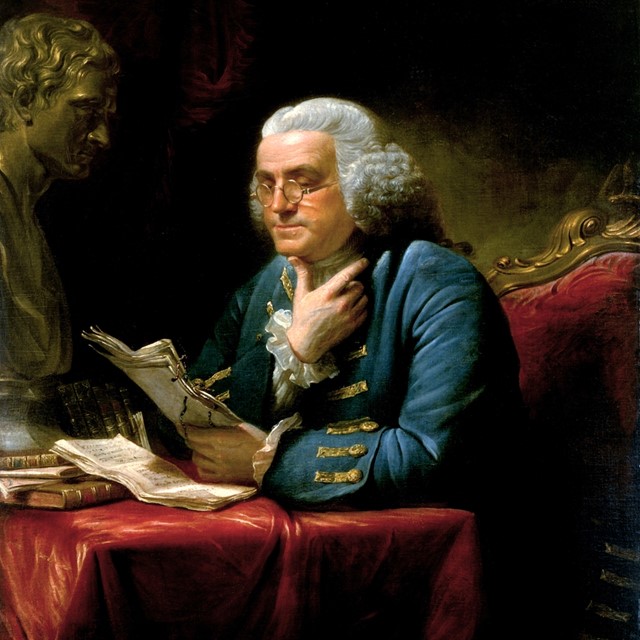 The Buckley School's founder believed that all public speakers should hone their presentation skills by reading poetry out loud. We keep that worthwhile practice alive by including a poem in our magazine each month for you to read aloud. Above, Franklin in London, 1767, a painting David Martin, displayed in the White House.

Maybe your first thoughts of this Founding Father are of the guy on the $100 bill, the publisher of Poor Richard's Almanac, the creator of America's first public library, or the inventor of bifocals.

Perhaps you envision him flying his kite in a thunderstorm to demonstrate the relationship between lightning and electricity (spoiler: he survived) or you think of his famous wit, his outspoken opposition to slavery, or his celebrity status in France.

"Want to be ballers, shot-callers, it's all about the Benjamins baby"

Franklin was a man of many talents, interests, and accomplishments—and though he was reluctant to call himself a poet, he wrote and published poems, too.

We provide one this month for you read-aloud enjoyment:

Some have learnt many Tricks of sly Evasion,

Instead of Truth they use Equivocation,

And eke it out with mental Reservation,

Which to good Men is an Abomination.

Our Smith of late most wonderfully swore,

That whilst he breathed he would drink no more;

But since, I know his Meaning, for I think

He meant he would not breathe whilst he did drink.