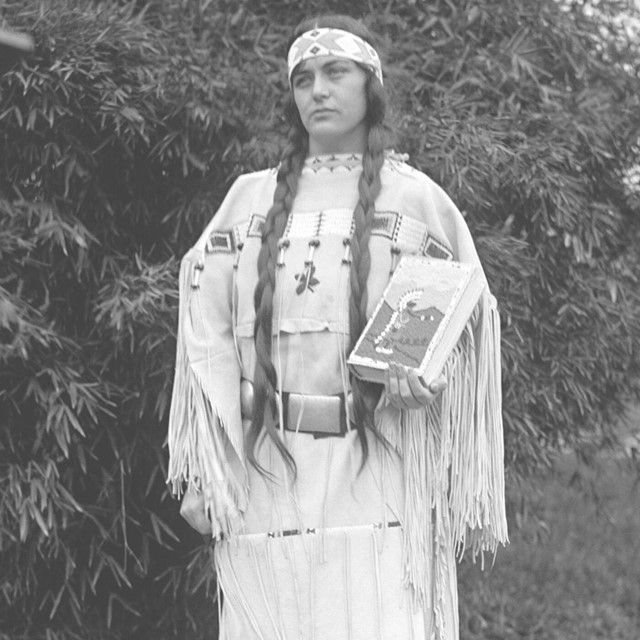 The Buckley School's founder believed all public speakers should hone their presentation skills by reading poetry out loud. We keep that worthwhile practice alive by including a poem in our magazine each month for you to read aloud. Above, Ruth Muskrat wears a buckskin dress, headband, and belt made by Cheyenne and Apache women for a speech she will make at the White House in 1923. She is holding a book, "The Red Man in the United States" by G.E.E. Lindquist, with a beaded cover which she will present to President Coolidge.

Ruth Margaret Muskrat was born in 1897 in the Delaware Nation Reservation, the daughter of Ida Lenora, of Irish descent, and James Muskrat, of the Cherokee tribe.

Ruth Muskrat earned a degree in English literature from Mount Holyoke College and became a prolific poet. There, she also discovered she could be a strong voice to advocate for Native Americans.

While still a college student, she delivered a speech in 1923 at the White House to President Calvin Coolidge, saying:

"We want to become citizens of the United States and to share in the building of this great nation that we love. But we want also to preserve the best that is in our own civilization. We want to make our own unique contribution to the civilizations of the world—to bring our own gifts to the altar of that great spiritual and artistic unity which such a nation as America must have."

After hearing her speak, President Coolidge was so impressed he invited her to join him for lunch with the First Lady.

A few years later, Muskrat married John Bronson and they adopted a Native American girl. Throughout her life, Bronson worked to help young Native Americans find greater opportunities, making her influence felt as a teacher and writer, and by advocating for policy changes through government positions and national charities.

Below, find one of her poems to read aloud.

And then we'll go home, my Cherokee Rose,
Where the Senecas live in the heart of the hills
By the rippling Cowskin, where the Saulchana grows,
We'll go home to the Coyauga hills,
To the sheltering Coyauga hills.