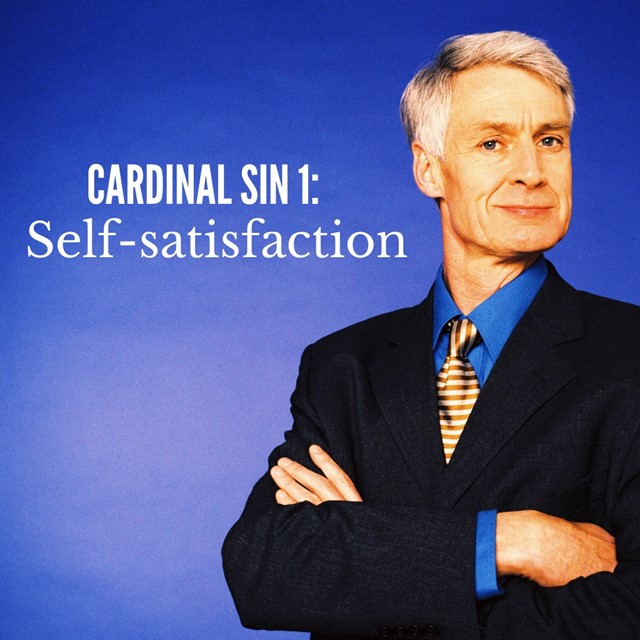 Reid Buckley’s "Strictly Speaking" was published by McGraw-Hill 10 years after Reid founded The Buckley School. Drawing on his decade of work with students, Reid designed it to be used as a reference for any speaking situation, so that a person could read as much or as little as needed. In 2019, we’re publishing excerpts from the first chapter in our online magazine: “10 Cardinal Sins that Amateurs Commit.”

"If you cannot suppress your arrogance and conceit, avoid blunders."

– From the "10 Cardinal Sins That Amateurs Commit"

Someone will see through you. The most sympathetic-appearing person in the audience may be your enemy. Gird yourself for battle always by cleansing your spirit of pomposity and a false sense of your importance.

A Tale with a Moral

One can’t conceal the dread truth from everybody, not all the time. At a flossy country club luncheon a few years ago the silverthatched tycoon held forth on the benefits to the community of the arts center he was funding.

Guests listened with rapt attention—or so it seemed—tittering at his jests, nodding heads solemnly at his aphorisms. His wife, sitting next to him on the dais, stared up at her spouse with the rictus of a worshiping smile on her face—twenty minutes. I was fascinated, watching her. Her expressions never varied. (She brought to mind Pat Nixon: bouffant blond hair, impeccable white linen suit.)

Her husband went on and on, winding at last into her peroration, at which time my attention was distracted by a 13-or 14-year-old who was seated at a round table below the dais in front of me: his daughter.

She was struggling with a yawn. She resisted, but the corners of her mouth were as though tugged away from her pretty little teeth by iron grapples. She could not suppress the eruption, which was prodigious. It tripled the cubic volume of her mouth, and it came forth loudly, like sixty pounds of air pressure escaping an inner tube of a tractor’s tire.

At which—this was amazing!—her mother burst into a silver carol of laughter, provoking titters and then howls from everybody in the room except the great man, who glared at wife and daughter in crimson-cheeked fury.

This is my first counsel. Don’t let the apple of your eye reveal to all the world the hollow person that you have become. If you cannot suppress your arrogance and conceit, avoid blunders; learn to dissemble the truth.

The remedy? Speak so briefly and self-effacingly that neither innocence nor astuteness will smoke you out.