On This Day: The Checkers Speech 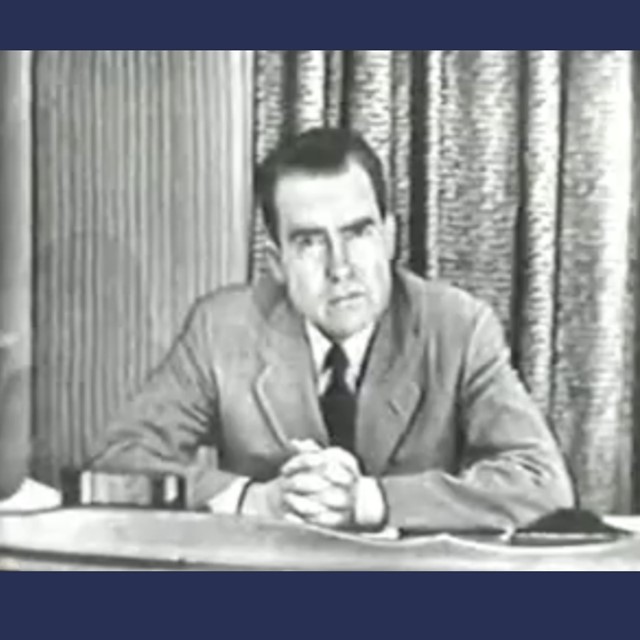 "Tuesday night the nation saw a little man, squirming his way out of a dilemma, and laying bare his most private hopes, fears, and liabilities. This time the common man was a Republican, for a change."

On September 23, 1952, he was the 39-year-old Republican candidate for vice president of the United States—and he had been accused of misusing campaign funds.

To respond, Richard Nixon delivered a half-hour television address that has become known as the Checkers speech, because of his reference to the family’s cocker spaniel.

In the speech, Nixon details his income and how he spends his money, painting a picture of modest living (and how Pat Nixon apparently did a job for which she was not paid).

Then he tells the story that has given the speech its name:

One other thing I probably should tell you because if we don't they'll probably be saying this about me too, we did get something—a gift—after the election. A man down in Texas heard Pat on the radio mention the fact that our two youngsters would like to have a dog. And, believe it or not, the day before we left on this campaign trip we got a message from Union Station in Baltimore saying they had a package for us. We went down to get it. You know what it was?

It was a little cocker spaniel dog in a crate that he'd sent all the way from Texas. Black and white spotted. And our little girl—Tricia, the 6-year-old—named it Checkers. And you know, the kids, like all kids, love the dog and I just want to say this right now, that regardless of what they say about it, we're gonna keep it.

If you watch the speech, you may also notice:

Biographer Conrad Black reports that Nixon celebrated the anniversary of the speech every year and was unhappy it had become known as the “Checkers speech.” Nixon called it his "Fund speech," writing later of his frustration: "as though the mention of my dog was the only thing that saved my political career."

"A 1999 poll of leading communication scholars ranked the address as the sixth most important American speech of the 20th century."

Checkers died in 1964 and his name now represents more than a single speech. William Safire said “the Checkers speech” has become an American idiom that refers to any emotionally charged speech by a politician.

Here’s the full speech, if you’d like to watch for yourself: