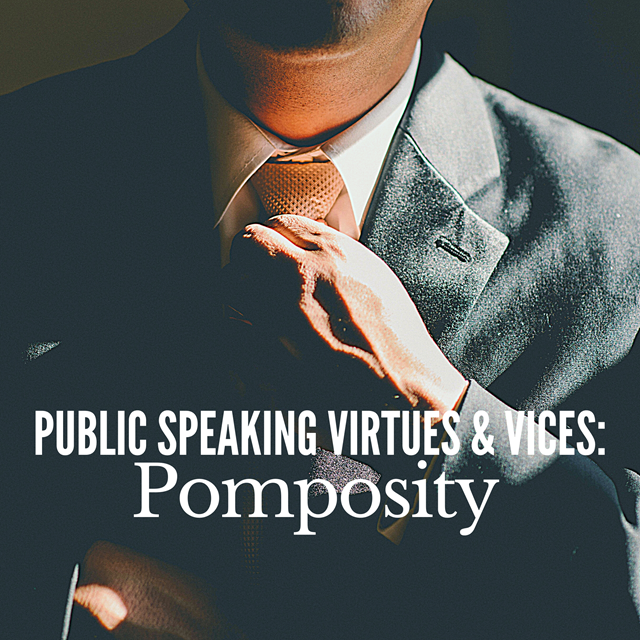 "Character is the primary element that a speaker brings to the stage. Everything else can be learned," writes Reid Buckley. In his book "Strictly Speaking," he looks at the virtues and vices a speaker can project. We’re providing excerpts in our online magazine.

"Some of my favorite characters that I've played have been very pompous because I love making fun of pompous people."

It's easier for me to envisage the pompous man than a pompous woman. In my experience, pomposity tends to be gender-specific, though that's not absolutely so. I have known a few pompous women.

The pompous fellow takes shape (in my imagination) in blue blazer and wonderfully creased gray flannel trousers. He was born with a foulard around his neck. His chin bobs in the air as he winches lower jaw this way and that in the effort to liberate the neck from a too-tight collar. It's as though he is constantly lifting his chin above the masses upon whom, down at, with an abundance of benevolence, he gazes. He listens to himself with evident approval as he speaks.

A liking for orotund (sonorous), grand-sounding phrases. They are unctuous, given to rhetorical furbelows (flounces, ruffles, showy trimmings). My distinguished colleague… The gentleman in the seventh row… I submit to you….

They relish in, they are infatuated by, the sound of their voices. The carriage of their bodies is stiff. They may beam on the audience with excessive avuncular goodwill, because it is their immense satisfaction with themselves are they are expressing.

This is a creeping disease, to which anyone is prone whose ego is periodically palpated by public attention. One must keep a regular check on oneself, appealing to one's spouse, colleagues at the office, and close friends for candid assessments: Did I please the audience? How did I come off?

A healthy lacing of self-effacement and self-deprecation on stage is salutary, along with, of course, anecdotes in which one figures but does not star.

The cure for extreme cases of pomposity is to snap (and keep in the locked drawer of one’s desk) a photo of oneself while one is suffering from loose bowels on the toilet, or vomiting, or engaging in any other bodily function that is (a) repulsive or (b) ridiculous. You will learn whether you are truly infected with pomposity to a terminal degree should you enjoy these pictures.