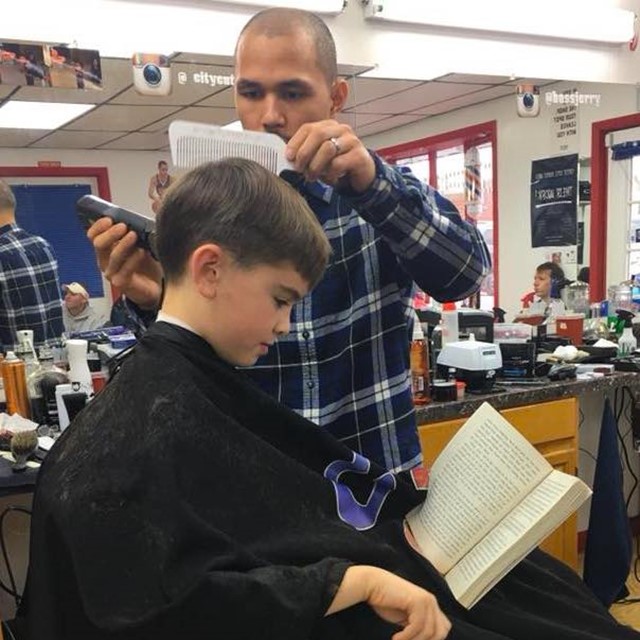 – From a CNN feature on the barbershop that encourages public speaking

If you haven’t heard of him yet, you may want to read about the barber who’s paying kids to read out loud during haircuts. We think Jonathan Escueta is on to something.

Our founder advocated reading out loud--poems, in particular--to improve your public speaking. Reid Buckley believed (and so do we) that reading aloud gives you a chance to stretch your vocal expressiveness, work on your timing, and improve your diction.

But Escueta has an even better idea. He believes reading out loud helps kids build the confidence to speak up in class—and eventually to be better public speakers.

At his City Cuts barbershop in Kutztown, Pennsylvania, kids can earn $3 to read out loud while they're in the barber's chair. What they read is up to them and according to a CNN story, the choices range from Diary of a Wimpy Kid to, yes, poetry.

Escueta started the program with $50 of his own money, because he knew public speaking was a big fear for many adults and he wanted to give kids a way to overcome that fear early. Now community members are helping out, donating funds and books to the cause.

Escueta emigrated to the U.S. as an eight-year-old and understands about feeling self-conscious and shy to speak up. He says one of his seventh grade teachers encouraged him to read out loud, and it boosted his self-confidence. That's why he believed it would help the boys who come to his shop.

"Our goal is for the kids to boost their confidence in front of others without fear of being judged," he told CNN. An unexpected benefit is that the project has also boosted Escueta's public speaking confidence through the TV interviews he’s been doing.

To find our always-growing collection of poems to read aloud, look here.

WNBA star A’ja Wilson is dyslexic. She explains how reading out loud helped her overcome her insecurities in this story for The Players’ Tribune.

Two years ago, ABC News featured a similar program at another barbershop. See that story, below: