Rhetorical Device of the Month: Asyndeton 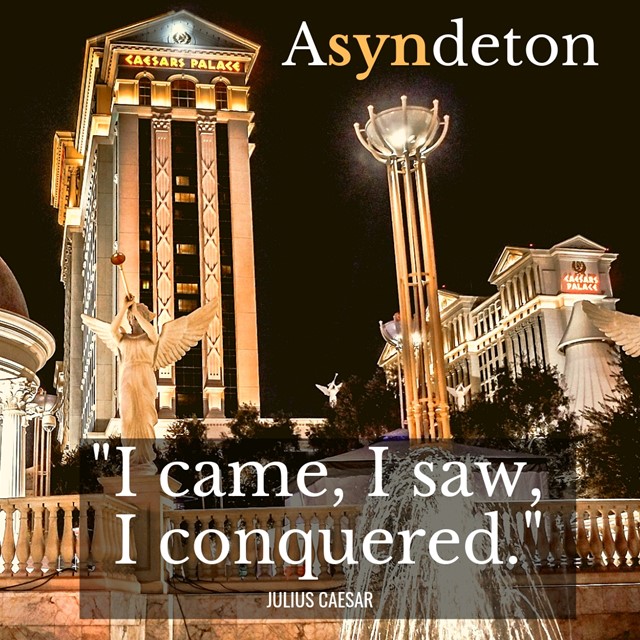 It's one of the most common tips we give to students in our Executive Seminar: Take out the connective verbiage. Speak in short phrases.

Turns out there's a term for that technique. Two terms, actually. Let's start with the broader one. Asyndeton.

Pronounced uh-SIN-de-TON (perhaps it helps to think "I sinned a ton on that last trip to Caesar's Palace"), asyndeton is a Greek word that means "unconnected."

In speeches, it's the phrasing that leaves out conjunctions. The effect is to punch up, speed up, intensify the rhythms of speech.

To see how it changes the feel of a statement, you might consider asyndeton and it's opposite, syndeton (or polysyndeton, more precisely), side by side.

Syndeton: She eats and sleeps and wakes and goes to work again.

In modern times, we might call asyndeton speaking in bullet points. But the effect is more subtle and elegant than that. Let's look at how it's used in some well-known speeches:

Winston Churchill, "We Shall Fight on the Beaches" speech:

As Buckley director Karen Kalutz is fond of saying, "It wouldn't quite have the same effect if he'd said 'We shall fight on the beaches and the landing grounds, and from the fields to the streets, and also in the hills.'"

More recently, as LitCharts points out, Barack Obama used the device is his eulogy for S.C. Senator Clementa Pinckney, one of the victims of the Charleston church shooting. LitCharts writes:

Barack Obama's presidency was defined by his meticulously crafted speeches, and many of these are filled with examples of asyndetism. The following appears toward the end of his eulogy for nine slain parishioners in Charleston, South Carolina:

"It would be a refutation of the forgiveness expressed by those families if we merely slipped into old habits whereby those who disagree with us are not merely wrong, but bad; where we shout instead of listen; where we barricade ourselves behind preconceived notions or well-practiced cynicism."

Obama's repetition of "where we," without a conjunction, puts direct emphasis on the "we," as he aims to unify people after a national tragedy.

That other term: Parataxis

Similar in effect and technique is the rhetorical device parataxis, in which a series of independent clauses (short sentences) are placed in succession.

As you can see, while you might be able to classify all parataxis as a type of asyndeton, perhaps not all aysndeton can be parataxis.

Mull that over. Make sense of it. Explain it to us. Please.

Or don't. But we do hope you'll employ asyndeton and/or parataxis in your speeches.

Speaking in short phrases, bullet points, lists can be a good thing.

Here's a clip from the movie Darkest Hour, with Gary Oldman as Winston Churchill putting this device to work: