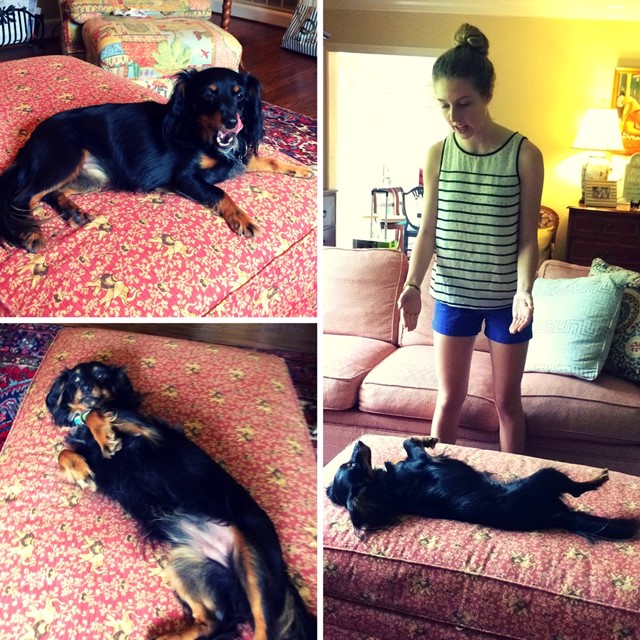 They may stick their tongues out, howl, or look a little shaggy—but this particular type of audience seems to do the trick for some nervous speakers.

The deal: Students can book time with service dogs to rehearse their speeches.

We read about the school’s audience dogs recently in The Washington Post. Caron Martinez, director of the Kogod Center for Business Communications, created the program. In the article, she cites anecdotal evidence from students who say presenting to dogs helps them be less nervous in front of human audiences.

It may be that dogs have a soothing effect, she says, or it might have something to do with increasing the time spent on rehearsal: “How do you get students to practice? Any way you can. Dog or no dog, that makes you a better public speaker,” she told The Washington Post.

Rehearsal is part of the process we stress at The Buckley School, so we polled our dog-owning coaches to see if they thought their beloved pets could help. The response:

“That’s cute," Alejandro writes in an email. "I don't think that Duende and Frida would like to see me giving them a speech. They would probably think one of them had done something wrong, and it might get them really confused. They are corgis, therefore they think they are always right! Here is a pic of them chilling by the beach, rather than being lectured."

Dog or no dog, something's going right over at the Daley house. Both of Jana's daughters continue to collect top honors for speech and debate, with Anna Katherine most recently coming in 13th in a national debate competition.

Jana convinced Anna Katherine to deliver part of a speech to Bella. Here's what happened:

Of the experience, Jana texted: "I made the mistake of getting the dog treats out, so she was going berserk. She's not a very well trained dog. She's not inclined to sit still if you're looking at her. She's mainly gonna roll over and wait for you to scratch her belly."

As for what has helped Anna Katherine achieve her winning ways, Jana reports that A.K. conceded it wasn't a dog but this: "I actually finally did learn to slow down, and to use the lectern."

If you're addressing a large group, you might want to see if Katie's pack of pups is available.

As far as speaking to them, Katie emailed: "Oh, the many responses of our family dogs to our orations! Dogs certainly do test my vocal variation and my ability to gesture. Lord knows what I will do if I see someone in the audience who reminds me of one of my dogs! Hopefully, I'll adjust my delivery to achieve my intent – to present a stimulating, informative, and memorable talk."

“My niece happens to be visiting with her seven-month-old yellow lab, and Apollo tends to increase my anxiety, not reduce it. We experimented with delivering The Gettysburg Address to him. Might be good practice for a hostile situation--I’d be ready if someone jumped on me or tried to chew my shoe.”

The conclusion: Ours might not be the greatest audience dogs. American University's dogs, on the other hand, appear to generate not only positive results but also good publicity. In addition to stories by The Washington Post and The New York Times, here’s a feature from CBS News: