Voice of the Speaker: Pace and Tempo 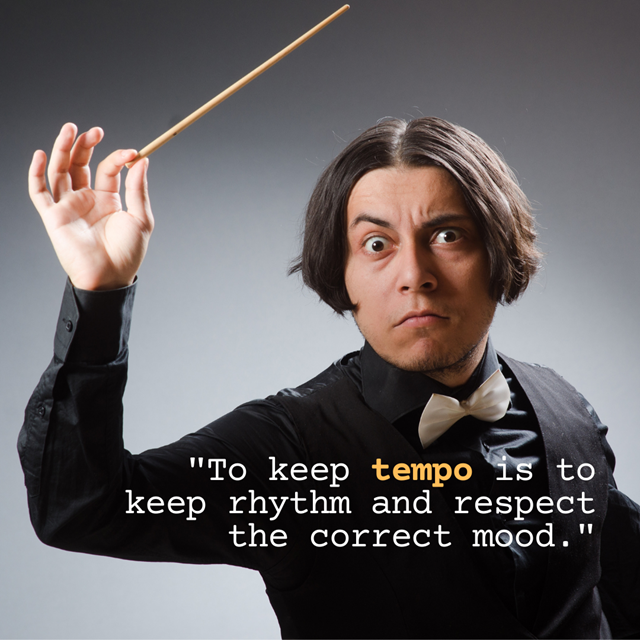 For speeches and presentations, the voice is a potentially powerful asset. We’re publishing a series of excerpts on how to use your voice to best advantage, from Reid Buckley’s book "Strictly Speaking."

"March, quick time dance, dirge: All the different tempos must be at the command of the speaker."

– Reid Buckley writing about the voice in "Strictly Speaking"

Begin briskly and conversationally, then vary your pace. Suit tempo to passage. Do not rush.

Pace is the rate of speed with which you deliver your text. Tempo is associated with music, the rate of movement at which a piece or passage is played. To keep tempo is to keep rhythm and to respect the correct mooed expressed not only by the notes but by the rate of speed with which they strike the ear...the difference in a sonata between the andante of a second movement, for example, and the scherzo of the third movement being a difference of mood--between the melancholy or poignant or introverted and the joyful dance.

March, quick time dance, dirge: All the different tempos must be at the command of the speaker.

More often than speaking too slowly, speakers rush. They set a breakneck pace that audiences cannot keep up with and so tune out. This occasionally suggests the speaker who is unsure of what he is saying, dubious about what he is saying, and whose nerves at the idea of performing on a stage are threatening to engulf him. Too fast a pace is a bane.

Too deliberate a pace may also be a bane. I've known the most intellectually fascinating scholars to place their audiences in anguish (and thus undo the purpose of their appearance) because it seems that between the first syllable of a word and the last syllable of that word, whole eons pass. Galaxies are born, gleam four billion years, then implode into a black hole. It takes these speakers a cosmological age to get done with a single paragraph, while the impatience of the audience is hostilely aroused.

Yet it is better to speak deliberately than to race. Permit the audience time to absorb the sense of what you are saying. Keep in mind always how dumb and lacking in understanding and refractory audiences are. Their obtuseness can scarcely be exaggerated.