John Lewis: Good Trouble at the March on Washington 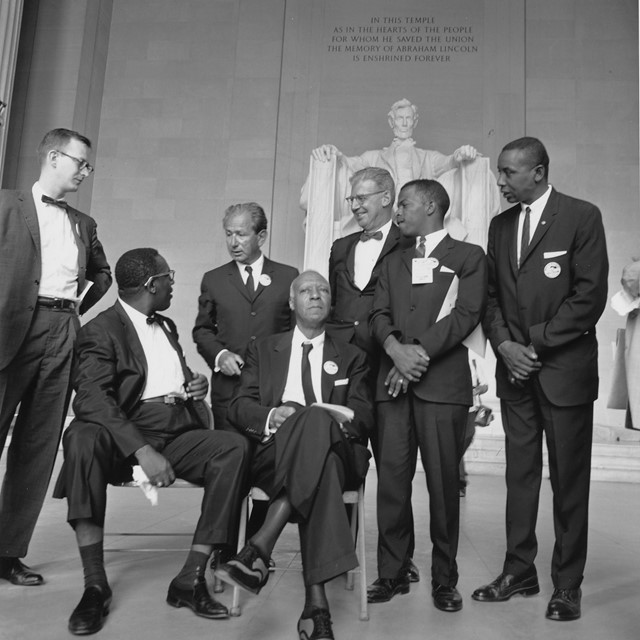 John Lewis, second from right, with the other leaders of the historic March on Washington on August 28, 1963.

"Certainly King's speech was the most eloquent that day. But the most ferocious was John Lewis's."

He was the youngest to speak at the March on Washington. And until his death on July 17, 2020, John Lewis was the last living speaker from that historic day in 1963.

Of course, this was the occasion for Martin Luther King, Jr.'s I Have a Dream speech, a speech with its own fascinating backstory. Lewis's speech has an interesting backstory, too, one highlighted by a recent article in The Washington Post.

When other civil rights leaders organizing the march read an early copy of Lewis's speech, they were worried. From The Washington Post story by Gillian Brockell:

Rustin told Lewis that someone had delivered a copy of his speech to Patrick O'Boyle, the archbishop of Washington, who was supposed to give the opening invocation.

"O'Boyle was so horrified by what he considered the inflammatory tone of my words that he had contacted the White House — [Justice Department official] Burke Marshall specifically. Then O'Boyle called Rustin and said he would have nothing to do with this event if I was allowed to deliver this speech."

But Lewis didn't have time to make changes. The march started earlier than expected. The organizers, including Lewis, had to rush from their hotel in order to be at the front of the crowd.

Pushed into a small office behind the statue at the Lincoln Memorial, Lewis was further challenged while other speakers were on the steps, delivering their remarks: U.S. Attorney General Robert Kennedy had been told about the content of the speech and was none too happy. The NAACP's president, furious, said Lewis could not deliver the speech as written. Even King seemed uncomfortable with Lewis's choice of words and imagery.

So on a typewriter, in that office, Lewis reluctantly made last minute changes. And then, just 23 years old, Lewis stood before the huge crowd on the mall in Washington and delivered a speech that still resonates today.

"We are tired. We are tired of being beat by policemen. We are tired of seeing our people locked up in jail over and over again, and then you holler "Be patient." How long can we be patient? We want our freedom and we want it now."

– John Lewis, in his speech at the March on Washington in 1963

Here's how Lewis, in 2018, remembered that moment he stepped up on the podium, according to an article from Vox:

He recalled that when he looked to his right he could see "hundreds and hundreds of young people who had been involved during the early days" and, when he looked ahead, he could see a "sea of humanity." To his left he saw "young black men and young white men in the trees trying to get a better view." At that moment, he said, he said to himself, "This is it."

Lewis, as you know, went on to serve for decades as an activist and in Congress, noted for his courage as well as his abilities as an orator who gave many more memorable and moving speeches. He also found new platforms for reaching audiences. One of his most quoted lines was heard by a younger generation through a Tweet, not a speech, "delivered" in 2018:

To read The Washington Post’s story on the events leading up to Lewis's revised speech, go here.

To compare the two versions of the speech—Lewis's original and his toned down version—go here.

For more on Lewis's speeches across his long career, see this article on VOX.

The beautiful children's book, Preaching to the Chickens, tells the story of Lewis's boyhood and his dreams of becoming a preacher.

To see Lewis speaking at the 50th anniversary of Bloody Sunday in Selma and compare it to his speaking style as a young man), go here.

Below, watch John Lewis deliver his speech at the March on Washington: