Poem to Help Your Public Speaking: The Darkling Thrush 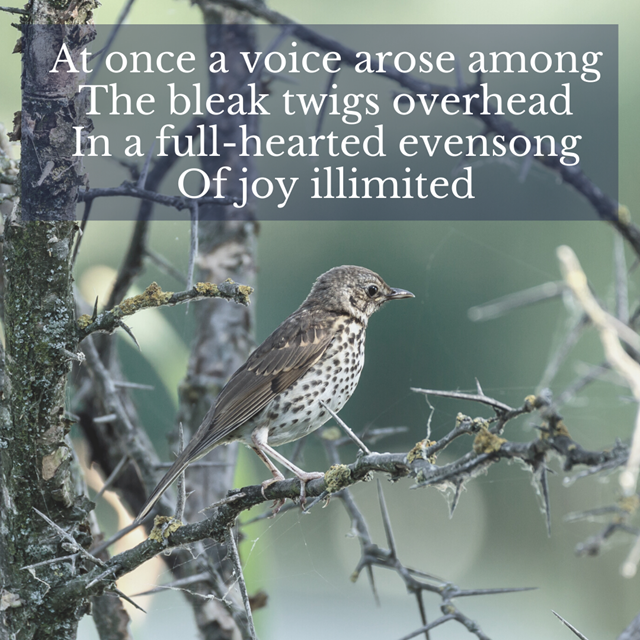 We find that most speakers can benefit from a little work on their enunciation. To experience the glorious benefits of crisp diction and hear why it's worth the effort, we direct you to Senate Chaplain Barry Black (a Buckley School alum, btw).

This month, we're revisiting Thomas Hardy for lines that read aloud like a bit of a tongue twister. His poem also happens to capture the mood of a winter month at the start of a new decade.

A few bits and pieces about "The Darkling Thrush" that we found interesting as we did a little research:

You can read more analysis and background on the poem here and here.

I leant upon a coppice gate

And Winter's dregs made desolate

The weakening eye of day.

The tangled bine-stems scored the sky

And all mankind that haunted nigh

Had sought their household fires.

The land's sharp features seemed to be

His crypt the cloudy canopy,

The ancient pulse of germ and birth

Was shrunken hard and dry,

And every spirit upon earth

At once a voice arose among

In a full-hearted evensong

Had chosen thus to fling his soul

Upon the growing gloom.

So little cause for carolings

Of such ecstatic sound

Was written on terrestrial things

Afar or nigh around,

That I could think there trembled through

Some blessed Hope, whereof he knew

And I was unaware.