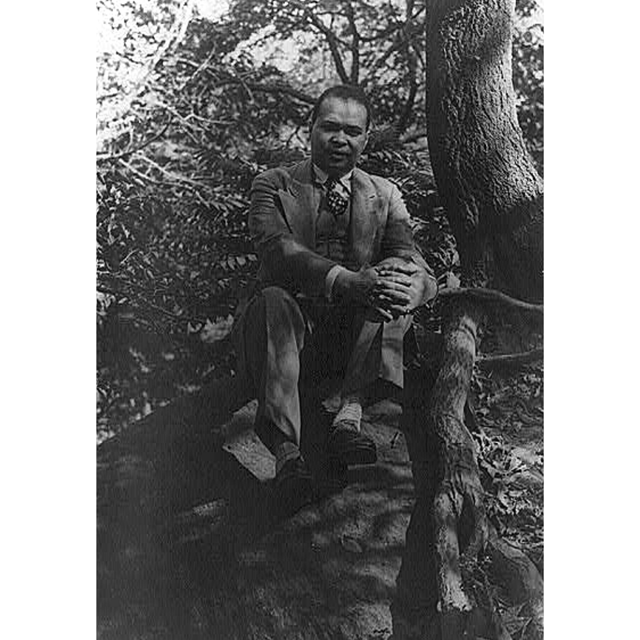 The Buckley School's founder believed that all public speakers should hone their presentation skills by reading poetry out loud. We keep that worthwhile practice alive by including a poem in our magazine each month for you to read aloud. Above, Countee Cullen photographed in Central Park by Carl Van Vechten in 1941, when Cullen was 38 years old.

"Yet do I marvel at this curious thing: To make a poet black, and bid him sing!"

– From the sonnet "Yet Do I Marvel" by Countee Cullen

Novelist, teacher, playwright and above all else—poet—Countee Cullen was a prominent figure in the Harlem Renaissance of the 1920s and spent the last years of his life writing for Broadway.

Cullen came to New York as a teen, was adopted by prominent Harlem pastor Frederick Asbury Cullen, and showed his promise as a poet from an early age.

In an introduction to Cullen’s collected poems, poet and professor Major Jackson writes this about the poem:

Though not perhaps a poem for the ages—only five years later, when he published his first book, Color, Cullen omitted this early work—"I Have a Rendezvous" marked an auspicious beginning.

In its moment, the poem was a minor hit, published in New York’s (white) daily newspapers, and soon reprinted in magazines and anthologies. One writer, Gaius Glenn Atkins, borrowed Cullen's phrase for the title of his own book, A Rendezvous with Life (1922).

Indeed, Cullen scholar Gerald Early has suggested that Cullen's precocious debut—rather than, say, the publication of Jean Toomer's Cane in 1923—ought to mark the beginning of what we now know as the Harlem Renaissance. This may seem a heavy weight of expectation to rest on a poem that is nothing if not light and cheerful, but it accurately reflects the eagerness with which young black writers were being looked to for signs of uplift and revitalization.

Cullen continued to excel as a student and poet. He graduated Phi Beta Kappa from New York University and earned a master’s degree in French and English from Harvard. His poems won multiple national prizes.

But his long-time friend Langston Hughes found fault with Cullen’s poetry—and his desire to transcend race in his writing. Though he did not identify Cullen by name, he referred to him as "one of the most promising of the young Negro poets" in his essay "The Negro Artist and the Racial Mountain," calling Cullen’s desire to be a poet not known by his race a betrayal.

Cullen was only 41 years old when he died. Below, for you to read aloud, the poem that first put a 17-year-old Cullen on the literary map:

I Have a Rendezvous with Life

I have a rendezvous with Life,

In days I hope will come,

Ere youth has sped, and strength of mind,

I have a rendezvous with Life,

Sure some would cry it's better far

To crown their days with sleep

Than face the road, the wind and rain,

To heed the calling deep.

Though wet nor blow nor space I fear,

Yet fear I deeply, too,

Lest Death should meet and claim me ere I keep

For more on Cullen’s complex life and varied work, here's an excellent piece by Major Jackson.

Below, you can hear Cullen's voice as he recites his poem "Heritage."