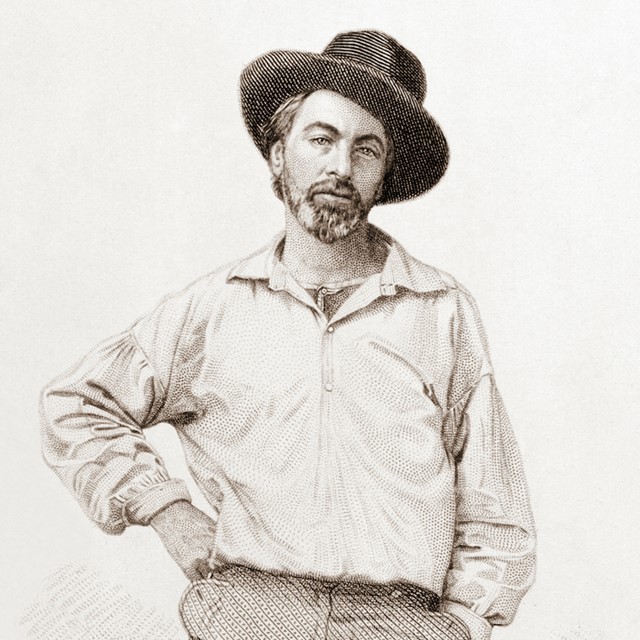 The Buckley School's founder believed that all public speakers should hone their presentation skills by reading poetry out loud. We keep that worthwhile practice alive by including a poem in our magazine each month for you to read aloud. Above, an engraving of Walt Whitman that appeared in the first edition of "Leaves of Grass."

"The proof of a poet is that his country absorbs him as affectionately as he has absorbed it."

– Walt Whitman in the preface to "Leaves of Grass"

One of the most influential American poets, Walt Whitman is often considered to be the father of free verse. Writing in the mid-1800s, Whitman not only challenged conventional notions about poetic form but also about sensuality and homosexuality.

Yet in other aspects of his life, he was a reflection of his times. He was deeply troubled by the violence of the Civil War, having volunteered as a nurse to treat wounded Union soldiers. Whitman was, at best, conflicted and inconsistent in his views on race. He was an abolitionist and admired by African American readers. Yet, Whitman made plainly racist observations about African Americans and Native Americans in his newspaper writing.

He was born on May 31, 1819, the second son and ultimately one of nine children. Whitman went to work at age 12 for a printer and largely taught himself through reading extensively. At 17, he was working as a teacher in a one-room schoolhouse on Long Island. Five years later, he became a full-time journalist and founded a weekly newspaper.

At the same time, he began to develop his style as a poet and in 1855, self-published Leaves of Grass, leading Ralph Waldo Emerson to discover the poet and praise his work. During his lifetime, Whitman continued to refine the poems in this volume and published several updated versions.

One of his best-known poems is "I Hear America Singing" from Leaves of Grass.

I hear America singing, the varied carols I hear,
Those of mechanics, each one singing his as it should be blithe and strong,
The carpenter singing his as he measures his plank or beam,
The mason singing his as he makes ready for work, or leaves off work, The boatman singing what belongs to him in his boat, the deckhand singing on the steamboat deck,
The shoemaker singing as he sits on his bench, the hatter singing as he stands,
The wood-cutter’s song, the ploughboy’s on his way in the morning, or at noon intermission or at sundown,
The delicious singing of the mother, or of the young wife at work, or of the girl sewing or washing,
Each singing what belongs to him or her and to none else,
The day what belongs to the day—at night the party of young fellows, robust, friendly,
Singing with open mouths their strong melodious songs.

As many organizations marked Whitman’s 200th birthday earlier this year, a number of scholars considered his legacy:

Brooklyn College professor Ron Howell writes about Whitman’s connection to Brooklyn and parallels to the life of Frederick Douglass in this article.

From The Walt Whitman Archive, George Hutchinson and David Drews provide this account of Whitman’s contradictory attitudes about equality, freedom, and race.

Bonus poem to read aloud: Langston Hughes was influenced by Whitman. Here is "I, Too" - a Hughes poem that responds to Whitman's "I Hear America Singing."