Poems to Read Aloud: Of storms and trees 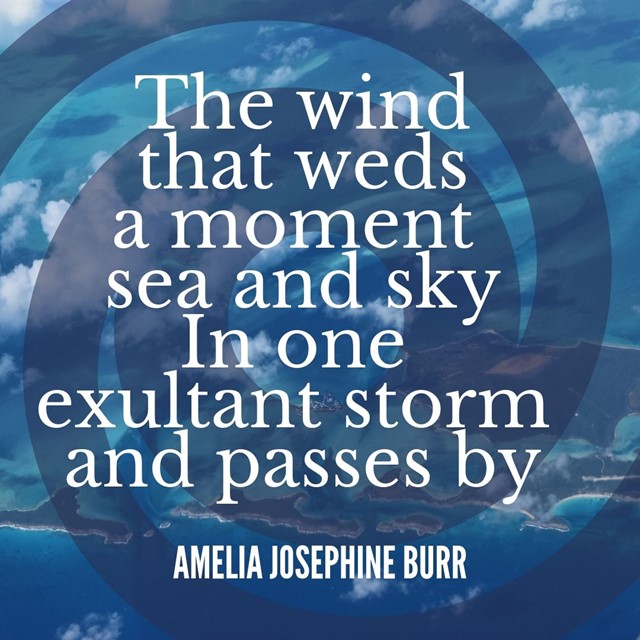 One positive outcome of spending so much time tracking the path of Hurricane Dorian this week—we came across American poet Amelia Josephine Burr.

Burr was born in November 1878 in New York City, served in the Red Cross during World War I, and became popular for her work as a lyricist and balladist.

There's not a lot of ready information about Burr. One account says her poems were popular in magazines targeting a middle class audience. Another book, Tumult & Tears: An Anthology of Women's First World War Poetry by Vivien Newman says Burr during World War I wrote patriotic poems that encouraged men to enlist and blamed their mothers when they didn’t.

Along with poems, Burr wrote plays, novels, and also verse specifically for children. Her novels and children’s poems reflected her wide experience as a traveler, particularly through India. Burr lived to be almost 90 years old, dying in June of 1968.

Below, the poem that led us to her:

We shall not shiver as we vainly try

To stir cold ashes once again to fire,

Nor bury a dead passion, you and I.

The wind that weds a moment sea and sky

In one exultant storm and passes by

And a second poem from her book Hearts Awake, published in 1919. It is a tribute to "Trees" poet Joyce Kilmer, who died while fighting in World War I.

To welcome you, that day in Picardy—

And all the flower of heavenly chivalry

Smiling upon you, calling you by name.

You went with them—and now, beyond our sight,

Sill in the ranks of God you sing and fight,

For death to you was one more victory.

It appears the two knew each other. We discovered that Kilmer dedicated his poem "Roofs" to Burr and found excerpts of a letter in which Kilmer, writing from the front in World War I, thanks Burr for sending him a knitted scarf.

And here's where you can find a copy of Kilmer’s Trees and Other Poems signed "To Amelia Josephine Burr from Joyce Kilmer November, 1914."