Rhetorical Device of the Month: Litotes 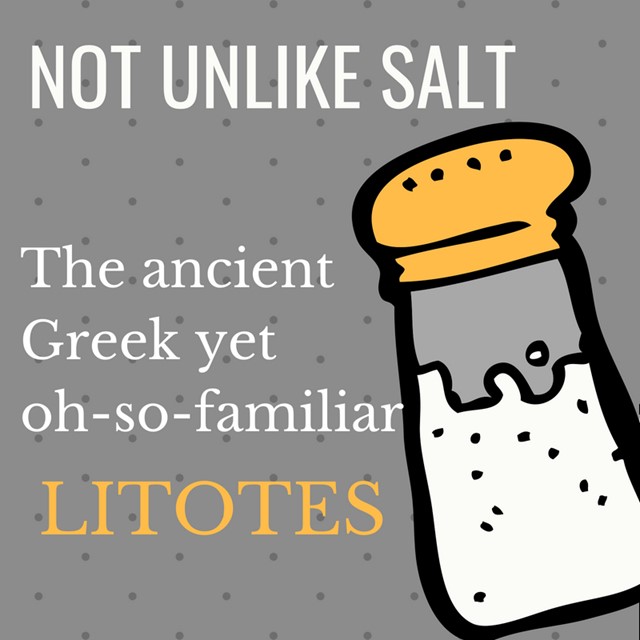 With hyperbole the likes of which the world has never seen and “double negative” trending on Twitter, it seems not a bad time to explore the rhetorical device litotes--and how it's used in public speaking.

It's not totally clear

Definitions of litotes include:

In some explanations, it’s described as a sort of double negative—though Merriam-Webster does a good job of explaining why that’s not entirely accurate:

“These constructions are generally considered to be artful wordings that express something subtly different from what would be expressed if the two negatives were cancelled out.

So while it might not be uncommon to see a moose in the area, that doesn't mean it occurs every day, either. The phrase is deliberately chosen because its intent is to dispel a notion of uncommonness with regard to moose.”

Also, not exactly Greek to you

It’s not as if you’re unfamiliar with litotes, even if you find the definitions too much like math or otherwise confounding.

Maybe your assessment of this morning’s coffee was “not bad.”

Or perhaps you admired yourself in the mirror with a “not too shabby” muttered under your breath.

As “Mind Your Language” columnist Martin Shovel has said, “Sometimes an unfamiliar ancient Greek word can mask a rhetorical device that’s as commonplace as salt.”

We use litotes every day, and they exists across languages—a perfect example of how we human beings have a deep need to hedge on what we mean to get our point across. Or something like that.

But Jay Heinrich in Thank You for Arguing makes a case in their favor:

"A litotes can make you sound more reasonable than your opponent, especially in an age when everyone else on the planet uses hyperbole as his sole figure….I mean, when understatement isn’t exactly the current fad."

And Shovel’s excellent look at the use of litotes in political speech shows you how this rhetorical device can work so well:

In November 2014, David Cameron made a speech on the potentially incendiary topic of immigration. And, like a man skating on a frozen pond on a sunny day, he proceeded with great caution:

"We should be clear. It is not wrong to express concern about the scale of people coming into the country."

He could have been more forthright and simply said: "It is right to express concern about the scale of people coming into the country." But he went for the more understated, euphemistic "it is not wrong". He used litotes to take the sting out of a highly divisive issue for both his party and the country. Litotes made a political hot potato just that bit cooler. And those on both sides of the immigration debate were able to find a crumb of comfort in what he said.

How not to get it wrong

Here’s a video that does a good job of pulling it all together, with a look at all the ways to pronounce litotes thrown in: