Speaking in Public: A Grab Bag of Tips 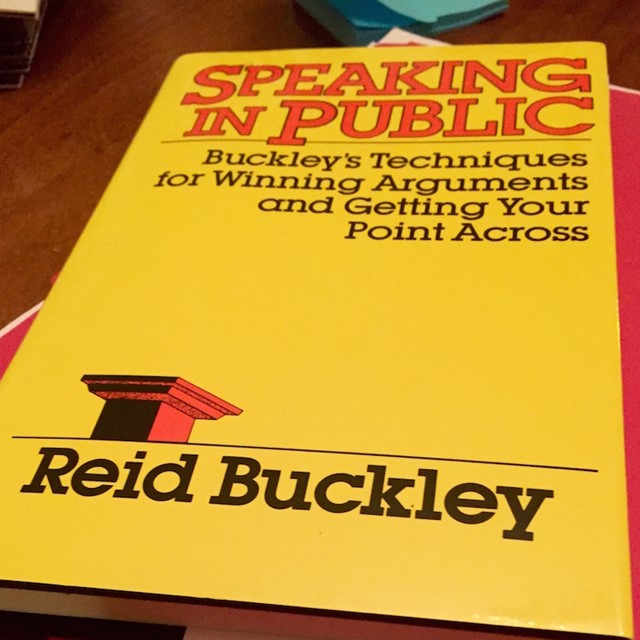 Thirty years ago, The Buckley School launched its flagship program and our founder Reid Buckley published his first book on public speaking. To mark the anniversary this year, we’ll be featuring public speaking tips and instructional excerpts from that book—"Speaking in Public: Buckley’s Techniques for Winning Arguments and Getting Your Point Across"—along with a few of our notes on his words.

"My palms end up splotched in most of the tints of the rainbow, and my shirts are often spotted at the breast and on the cuffs, but it pays."

– Reid Buckley, on the cons and pros of using highlighters to mark up a speech

From Chapter 10: A Grab Bag of Useful Tips

Speaking from a Text

In college, I memorized. Don’t any longer. I quickly gave up trying to wing my talks extemporaneously, either, resorting to those three-by-five index cards that are admissible in college debate and that Ronald Reagan made famous.

I still use five-by-seven inch cards (much easier to type on1, they stack more discreetly, and more information can be packed into them) for important quotations, statistics of lines of reasoning that may be pertinent to the several topics, and therefore interchangeable, but these are accessories to the body of my talks.2

Underscoring the Text for Extemporaneous Effect

Any executive putting in twelve-and fourteen-hour working days will sympathize with what I say next, and will be able to extrapolate from my experience what is useful to him. On tour, one is unable to rely on performing at all times at one’s best. After a week or so traveling the circuit, cumulative exhaustion sets in. Booking A gets its money’s worth, Booking B gets a subpar performance by a speaker whose jet from Los Angeles landed three hours late, having fought air turbulence the whole flight.

I therefore compromise. I write out all my texts from first word to last. Using fiber pens3, I underscore heavily. I am a demon about this. I divide long words that tend to defy instant discrimination, or that tend to knot the tongue, into syllables—into discrete parcels, such as "de/tran/scen/dentali/zation." (The subject of that talk being conservative political philosophy, use of this and other brain-crunching terms was unavoidable.) Further, I score the emphasis as one does in poetry, with blips and dashes, as for example: "dé/trăn/scěn/déntalized."

When I want to make absolutely certain that I wrest from an assembly maximum attention to a line of reasoning or to a single word, I speckle my text with little round polka dots that call for a caesura, thus: "Friends, o Romans, o Countrymen, o lend me your ears."

"Magic markers"4 are a boon. Those gorgeous florescent hues swabbed over words or phrases cause them to leap into one’s eye, so that a glance tells one where one is and where one must go next.

I established a color code.5 Chartreuse green is for proper names, sky blue for titles of books and articles, canary yellow for all quotations and rose, orange or magenta for content I want to emphasize. All this takes a lot of time. My palms end up splotched in most of the tints of the rainbow, and my shirts are often spotted at the breast and on the cuffs, but it pays. The very labor helps impress the talk into one’s mind. In poor lighting conditions, one’s place in the text is not lost—which can be a frantic feeling!

I then follow the Valenti6 prescription, committing to near memory first and last paragraphs. All anecdotes, asides, and most illustrations I leave as obbligatos7—unwritten, providing an opportunity for free extemporization and for moving out from the pocket of the lectern (which incidentally, one is prevented from doing when there are mikes, or if one is speaking at a banquet table—see below).

The first sentences of a paragraph I repeat and repeat to myself until I have them almost pat. When preparing for a tour, I practiced the talks maybe a dozen times each before setting out—at first silently, reading the speech slowly while muttering the words, then reciting it out loud, to myself, into the mirror. (There are a few exercises that make one feel so foolish, but humility accustoms us.)

1For our young readers, the typewriter was a machine that preceded the laptop.

2Had you written a sentence of this complexity at his seminars, Reid would’ve demanded you simplify and cut it in half.

3What most people call “felt tip pens” or markers

4Or what you’d probably call highlighters

5We usually recommend a simpler approach—highlighting the phrases where you’d like to incorporate a descriptive gesture. However, you should use any system of marking up your text that is helpful to you!

6Jack Valenti, who wrote the book “Speak Up with Confidence,” which Reid refers to a number of times.

7We believe Reid is suggesting you make a note along the lines of “tell story about landing my first job here” then ad lib the story so you’re not reading from a script, as opposed to the musical term which means “perform without change or omission.”