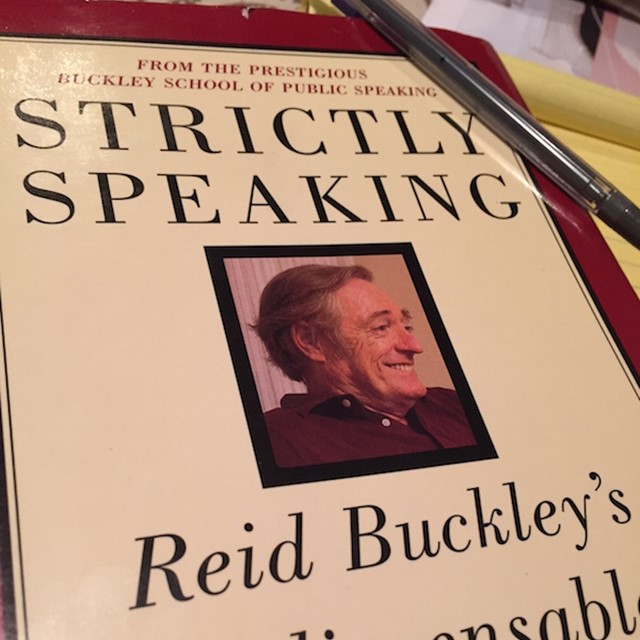 In 1999, The Buckley School's founder, Reid Buckley, published Strictly Speaking, a handbook he hoped would help all of us with the many types of speaking we face. The following excerpt is from his advice on inspired by the challenge of giving toasts at retirement parties (pgs 60-62 in the 1999 McGraw Hill ed.), though it applies to any toast you might give.

Toasts differ in obligation, purpose, and function, depending on the circumstances of the ceremony that they embellish. In general, however:

1. The briefer the better.

2. The wittier the better.

3. The more anecdotal the better.

1. The briefer the better.

Unless you are the best man at the wedding, the father or mother of the bride, the ranking person other than the guest of honor, keep your toast under sixty seconds. That’s plenty of time to be gracious; taking longer risks collaborating in a celebration that drags on too long. No one’s toast—unless one is a phenomenon of wit (you’ll have to be the judge of yourself)—should exceed three minutes—not even the groom’s to the bride…unless he is being witty, which is sure to miff her.

2. The wittier the better.

Strive for incisive, revelatory wit. Never say anything touching on a debility in the subject’s character, unless that fault is in the way of an endearing eccentricity. That a person is so absentminded that he commonly misplaces his car keys is okay, but that this same person absentmindedly sat on Aunt Eleanor’s pet chihuahua, snuffing the poor brute’s life out, is not okay.

In the effort to be amusing, some people unintentionally offend—even hurt—the person they are supposedly commending or expressing their appreciation for. It’s bad form—it is caddish—verbally or in print, to disparage a person, unless he or she is a public figure or a celebrity, in which case the person is fair game. When toasting anyone, be especially sensitive to the cruelty that can adhere to wit.

3. The more anecdotal the better.

A toast that recounts some charming or amusing story about the subject is always flattering and in good form, so long as it isn’t mawkish.

With anecdotes, be careful about tarrying in what professional comedians call the setup: taking too long to arrive at the punch line. But if the setup includes revelatory insights about the person being honored, which, while leading to and preparing the punch line, are in themselves fun, take your time.