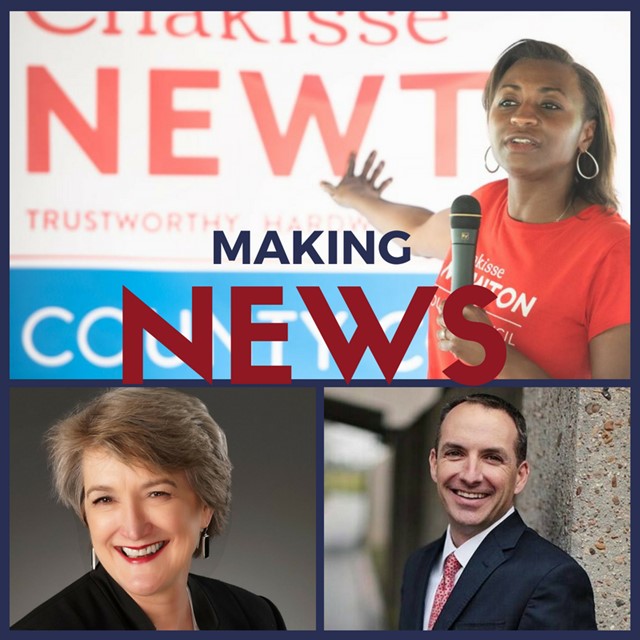 Whenever we see good news about Buckley alum and faculty, we’re excited to pass it on. And we know our Buckley alumni enjoy keeping up with each other, too. Here are a few things that have made their way recently to our inbox. Pictured above: Chakisse Newton, Jane Frederick, and Ritch Wheeler--all winners in recent elections (Photos courtesy of their campaign websites)

Darcy served as CEO of the Goldwater Institute for 15 years and wrote The Right to Try, a book that's led to recent laws giving people with terminal illnesses the ability to try experimental treatments. Darcy has seen the foster care system up close. After first becoming a foster parent herself, she has now adopted three children.

Long-time Buckley School friend Suzanne Pollak is featured in Town & Country magazine this month, sharing her wit and wisdom on the merits of the top sheet.

Suzanne first came to The Buckley School in the 1990s, and even offered a course in entertaining and etiquette for a brief time through the school. A former spokesperson for Federated Department Stores, She’s co-authored several books including Entertaining for Dummies and is the dean and co-founder of the Charleston Academy of Domestic Pursuits.

Congratulations to these winners

Architect Jane Frederick won her race to become president-elect of the American Institute of Architects. Jane is a partner in Frederick + Frederick Architects in Beaufort, S.C. A home designed by her firm was included last month in The Wall Street Journal feature “The Rush of Riverfront Living.” You can watch Jane deliver one of her campaign speeches here!

Ritch Wheeler was re-elected mayor of Shenandoah, Texas, in May. Ritch is regional sales manager with American Financial & Automotive Services, based in The Woodlands. He’s served as mayor of Shenandoah—located just north of Houston—since May 2016.

Chakisse Newton is a new member of the Richland County Council in South Carolina, after winning the race earlier this month. Richland County includes the state’s capital city, Columbia. Though Chakisse is a veteran speaker accustomed to winning, this was her first time running for political office.

A promotion for our darling bud May

Former Buckley staffer May deLoach continues to impress and delight and was recently promoted to Product Consultant for vAuto, a division of Cox Automotive.

May joined Cox in 2015 as a sales executive with their finance company, NextGear Capital. Many Buckley School alum will remember May as a seminar director and public speaking coach for the school, before she joined NextGear (one of our favorite and frequent clients).

Congratulations to a graduate of our Young Adult program—Anna Katherine Daley—on securing what has to be an interesting summer job. She’s working in the office of South Carolina Congressman Trey Gowdy.

Anna Katherine, an award-winning speaker and debater who attended our youth program in the summer of 2015, is a rising sophomore at Hillsdale College.

Buckley co-director Jenny Maxwell is having surprising summer—discovering that her script for a documentary received an Emmy nomination just after she found herself (along with Buckley coach Alejandro Garcia’s spouse, Britt Hunt) on the cover of the Columbia SC Insider’s Guide. You can also see the moving version of that image in the city’s television commercials.