What a Puppet Show Can Teach You About Presenting 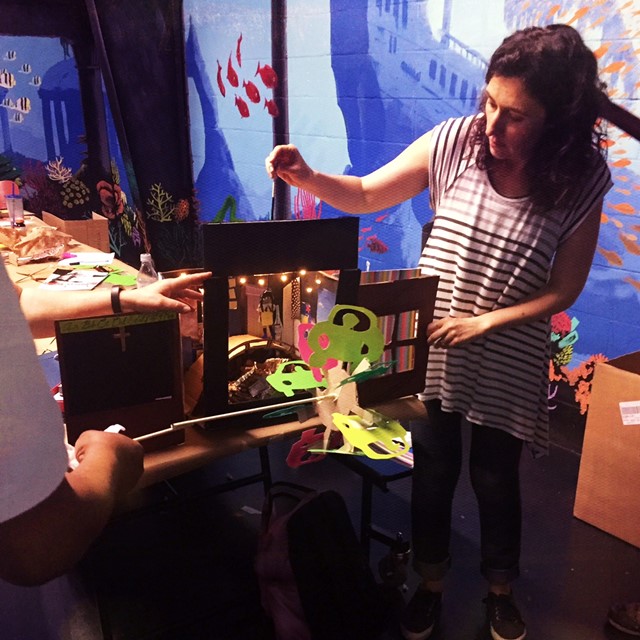 A packed house on a Saturday night and there we stood, ready to debut….a puppet show?

Just two nights earlier, Alejandro Garcia and I had shown up for a workshop with Facto Teatro. In a short six hours, with three other strangers, we’d chosen a story, converted it into a script, built a complete puppet show, rehearsed it, and performed it for our classmates and instructors.

Now we were performing it in our first-ever puppet slam.

Alejandro and I were hyped about the entire process, so much so that no one else could bear to be around us because it was all we could talk about for 48 hours. As writers, artists, and public speaking enthusiasts, we were testing our skills in a new forum and being reminded of some fundamental principles.

"Long ago, Head was all by himself. He had no legs, no arms, and no body. He rolled everywhere. All he could eat were things on the ground that he could reach with his tongue."

– The opening lines of "Head, Body, Legs," a Liberian folktale

1. It’s hard to beat a good story. Lucky for us, one of our teammates was teaching a Liberian folktale “Head, Body, Legs” to her elementary school students—and she’d brought it along to our class. It’s a fable about the benefits of teamwork, told by body parts wandering the forest and bumping into things. The story was visual and funny (not to mention applicable to our situation). I was able to turn that into a script and use repetition to underscore the humor.

2. Simple visuals can be powerful. We had only paper, cardboard, strings, sticks, and some magnets to build our puppet show. Our team had an advantage: Alejandro is an accomplished artist. But because of the time limit, he and the rest of us had to work quickly. We used bold, simple shapes—and were surprised at how pleased we were with the look of our show.

3. When you can, add an element of surprise. That was a tip from our instructor, Alejandro Benítez, of Facto Teatro. When our puppet head rolled around the forest eating mushrooms, we surprised the audience by giving him a bright red tongue that shot out. Another way we kept the surprises coming was to give each body part in the story a different voice: for example, “Legs” spoke with a spicy Colombian accent while “Arms” sounded more like Col. Sanders.

4. Enthusiasm and energy count for a lot. This was true not just for our show but for all of them. When the performers were committed to making it come to life, it did—even when things didn’t go quite as planned.

5. What you can inspire the audience to imagine might be better than anything you can show them. In our own production, we were struggling to assemble all the body parts into a single human being. Our instructor suggested we do it behind the scenes, making noises of struggle, then re-presenting the puppet fully assembled. The audience loved this—imagining the head, arms, body, and legs fighting it out—rather than watching us bumble around to make it happen.

6. It's good to be challenged to try new things--and specific feedback and gentle encouragement from experienced artists is everything. As coaches, that's what we try to give. As students, we greatly appreciated being on the receiving end of that--from the Facto Teatro company and from puppet artist Lyon Hill, who helped us solve problems and made us feel as if we could stand up on that stage and pull it off.

As for our puppet slam debut, I'm happy to report that our cardboard set did not fall off the table during our performance, that the audience laughed loudly on cue, and that we may even be game for creating another work to slam in the near future.

Meanwhile, here's a video interview with puppet designer Lyon Hill, in which he talks, among other things, about how puppets helped him get past stage fright: