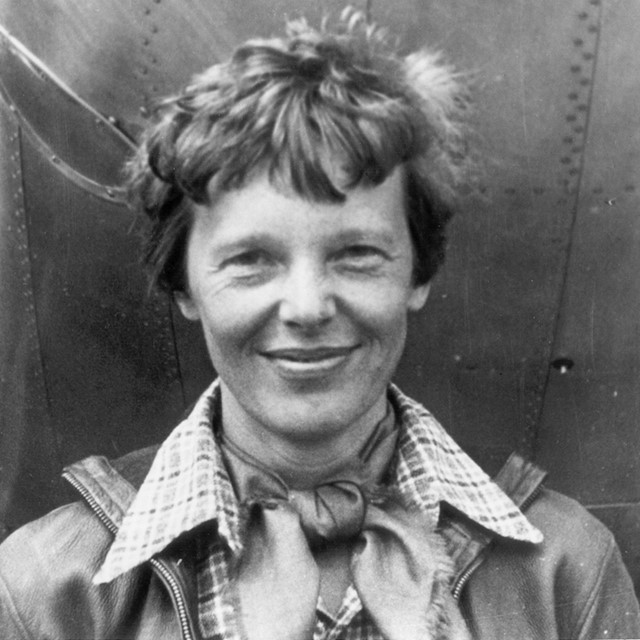 "I hope women may come to share with men the joy of doing. Those can appreciate rewards most who have helped create."

Amelia Earhart was only 39 years old when she and her plane disappeared during her quest to become the first woman to fly around the world.

One of her best known speeches—"A Woman’s Place In Science"—was a radio address given in 1935, less than two years earlier. It was part of a broadcast exploring the emerging roles for women in science.

Earhart was considered both then and now to be a pioneer of women's equality. Her first flight was as a passenger in 1920 when she was 23. It lasted just ten minutes but by the time plane returned to the runway, Earhart says she knew had to learn to fly. In 1922, she set the world altitude record for female pilots and in 1928, she completed a crossing of the Atlantic, the first woman to do so.

She became a huge celebrity and along with books and endorsements, spoke on a lecture tour. And she continued to pursue firsts, always determined to earn her acclaim and advance women's roles in aviation and beyond.

Lessons we can learn from Earhart's radio address

Listening to her 1935 speech today, we can take away ideas to apply to our own presentations:

The Buckley School's founder often said that people can argue with your facts and your opinions, but your personal experience is unassailable. We'll add that personal experience often helps a speaker connect to their audience, because it brings an energy and intimacy you don't often get from other material you use.

In this speech, Earhart sounds formal. It's clear she's delivering from a script. Yet you'll notice that when she references her personal experience, her speech gets a spark. There's a warmth and energy there that isn't apparent in the rest of her address.

We often talk about tone being communicated through voice and body language but in this radio address, tone is hugely influenced by the choice of words. Earhart's language and phrasing is formal, more like an academic paper than a conversation. That tone creates a seriousness that some argue the times and topic required.

In your talks, paying attention to word choice has a similar impact. We tend to want to be less formal these days in our presentations. Yet using multi-syllable words and our professional vocabulary (a.k.a. jargon) can create a distance between us and an audience and can make us and our topic seem less approachable, perhaps, than we'd like. Being aware of this and making deliberate choices with language can significantly change your tone.

As you listen with a critical ear to Earhart's speech, you'll also notice that most of her sentences are roughly the same length—and that all tend to be longer, more complex sentences. Imagine this speech with greater variety. A long sentence, followed by a shorter one for impact.

For example, let's start with her text. It reads like this:

Flying is perhaps the most dramatic of recent scientific attainment. In the brief span of thirty-odd years, the world has seen an inventor's dream, first materialized by the Wright Brothers at Kitty Hawk, become an everyday actuality. Perhaps I'm prejudiced, but to me it seems that no other phase of modern progress contrives to maintain such a brimming measure of romance and beauty, coupled with utility as does aviation.

Without changing many of her words, we can vary sentence length. That, in turn, allows the speaker to have a more dynamic delivery, with pauses that are less plodding and predictable. And it makes the complex sentences easier to follow:

Flying is perhaps the most dramatic of recent scientific attainment. In the brief span of thirty-odd years, the world has seen an inventor's dream. What was first materialized by the Wright Brothers at Kitty Hawk has become an everyday actuality. Yes, perhaps I'm prejudiced. But to me it seems that no other phase of modern progress contrives to maintain what aviation can provide: a brimming measure of romance and beauty, coupled with utility.

Here are a a few of our guidelines for sentence length:

At this link, you can see the actual text of the speech from the Library of Congress.

Here's another perspective on Earhart and this speech from Denise Graveline’s excellent website.