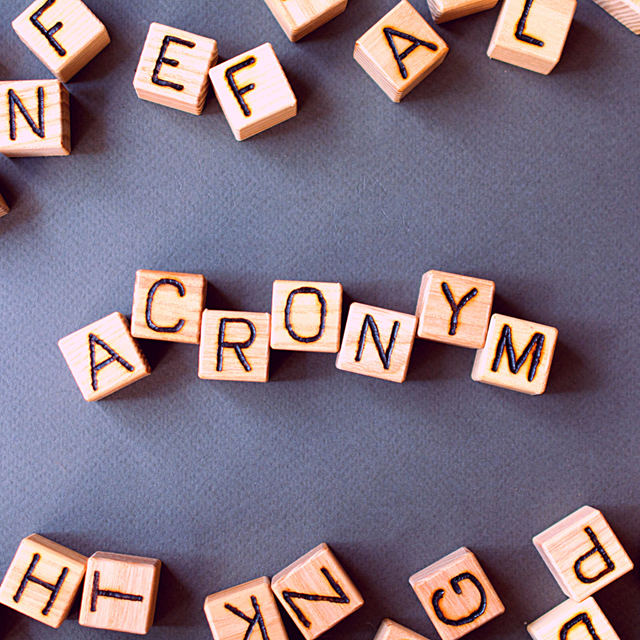 We've seen a lot of a certain GEICO commercial while watching the Olympics. It's inspired us to weigh in on a question we get a lot: How should you approach using acronyms in speeches and presentations?

And how could it not inspire us? Their TV spot makes the case that we've achieved acronym overload. The observation comes from a company with a name that is an acronym for Government Employees Insurance Company. Let the games begin.

What is an acronym?

An acronym is a made-up word that's formed by using the initial letters (or syllables) of a string of words.

There's a distinction between YOLO, an acronym, and OMG, which is technically an initialism.

An acronym comes out as a word. Yo-low. An initialism requires you to say the individual letters. O-M-G.

But most people, including GEICO and us, call them all acronyms. And everyone seems to know what we mean.

When should you use acronyms in a speech?

We say use the acronym when it's better known than the thing it stands for. MRI (an initialism, we know) is more familiar than the string of words it represents, so we would not say "magnetic resonance imaging" in most cases. Just MRI.

You might also use an unfamiliar acronym if it's important for the audience to get to know it. For example, if you're presenting to a group of new hires at a hospital and they'll be encountering a particular acronym frequently, it might be important to help them get familiar with it.

When should you avoid acronyms?

There are several guidelines we recommend. They ask you to be a little more deliberate in your deployment:

Make it work for the audience

That's really the most important guideline—how does this work for my audience?

Will this acronym make my message easier to follow, more useful, or more engaging? Or will it become an obstacle or potential point of confusion?

And if you want to see that GEICO commercial, here you go: