PowerPoint: How Much Will They Love This Pitch? 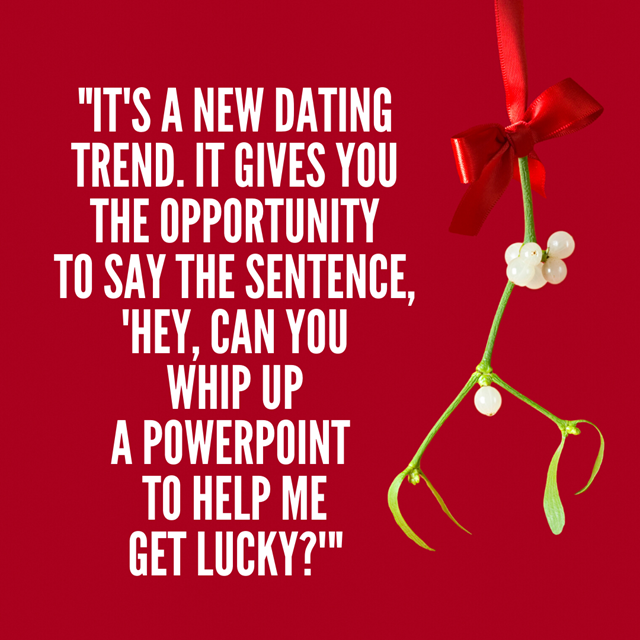 "It combines all the fun of a work meeting with the people who know all your worst secrets. And if your friend's name is Ted, you can say, thank you for coming to my Ted Talk."

– Peter Sagal of NPR’s "Wait Wait…Don’t Tell Me!" on the latest PowerPoint twist

Mistletoe, that parasite of romance and smooching, kills its host and has a name that derives from the ancient Anglo-Saxon word for "bird poop."

So maybe getting a date by PowerPoint won't sound that bad to you, after all.

It seems to be working for some people, who are trading their dating apps for pitch decks, hoping their wingmen can make presentations that land them potential life partners.

"The two things I love in this world more than anything else are my friends and working way too hard on PowerPoints. This event was the perfect combination of the two," said a young woman who pitched her best friend at an event last month in Brooklyn. The best friend, a writer, tells the story on Mashable.

So while some fear Death by PowerPoint and others are projecting the death of PowerPoint, at least one entrepreneurial pair is starting up something with PowerPoint…and hoping to help others start up a little something, too.

Here's what we like about this idea: Even if the soul mate never materializes, you've still had the chance to work on your presentation skills.

To read about the woman whose friend pitched her, find that story here.

Here's another article about the dating pitch-arama from The New York Times.

And below, you can hear that NPR segment with Peter Sagal, who seems to be feeling the same vibe we get—Love Boat runs aground at The Office.