Rhetorical Device of the Month: Zeugma 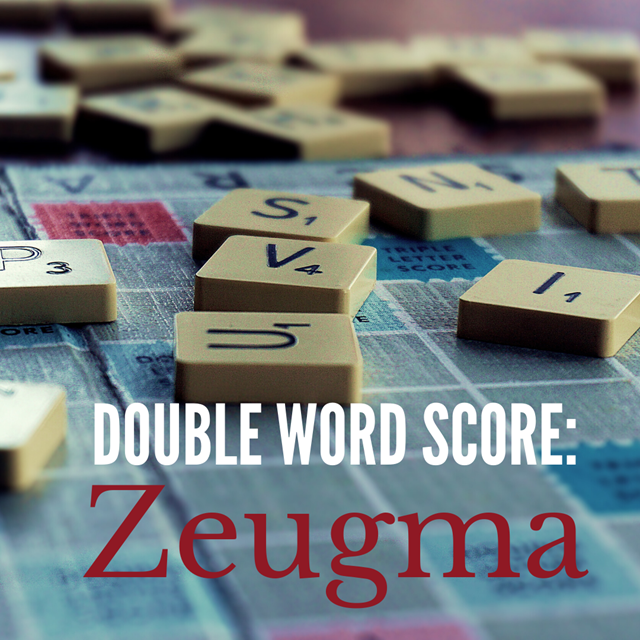 "Yet time and her aunt moved slowly—and her patience and her ideas were nearly worn out before the tete-a-tete was over."

– From "Pride and Prejudice," when Elizabeth Bennet finds herself making awkward small talk with Mr. Darcy

It's a rhetorical device that can perk up your message and the listener's ears.

And since we think you might be playing a bit more Scrabble these days, you may also find it useful to have another Z word in your quiver.

Allow us to present zeugma.

"Cleverly crafted zeugma can cause the literary equivalent of a double take," says the website LitCharts. Here's an example to show what they mean:

"You are free to execute your laws, and your citizens, as you see fit."

That's Commander William T. Riker getting double duty from "to execute" in an episode of Star Trek: The Next Generation—and it's a great example of zeugma in action (though it sounds like the laws of this galaxy might not be so great).

Zeugma (pronounced ZOOG-mah) is defined by Merriam-Webster as "the use of a word to modify or govern two or more words usually in such a manner that it applies to each in a different sense."

You’ll also find some differences and debate over what counts as zeugma versus what should be called syllepsis. There's no clear agreement, and we think it's more fun to say "zeugma," so that's our pick.

Other fun facts about zeugma, thanks to Merriam-Webster:

Using it to charm and challenge

So why might a speaker or writer use zeugma? One, it works a bit like a pun—and can bring playfulness and humor to the way we express ourselves. Two, because it challenges the mind with its little trick, it also gets the listener or reader thinking and engaged with your message.

The website LitCharts suggests that zeugma's charm comes from the disconnect, reaching back to the word's Greek origin with a simile that likens the effect to two yoked oxen:

The two animals don't immediately fall into step with one another. This is also the case in language: zeugmas don't work seamlessly, and it's actually that tiny disconnect between the two "yoked" pieces of language that creates the pleasing comedic or dramatic effect of the zeugma.

Here are a few more examples to help you think about how you might use the device:

"You held your breath and the door for me," Alanis Morissette sings in "Head Over Feet."

"I sometimes dream of a larger and more populous house … where the washing is not put out, nor the fire, nor the mistress," Henry David Thoreau writes in Walden.

"For the space of a minute they tugged and tore at each other's hair and clothes, punched and scratched each other’s nose, and covered themselves with dust and glory," writes Mark Twain in The Adventures of Tom Sawyer.

"I was in no sort of nick for this encounter, I admit, full of fear and afternoon scotch and the homeward tug," writes Martin Amis in Money.

This article on persuasion in Psychology Today includes a discussion of zeugma and syllepsis.

Merriam-Webster has actually produced a podcast about zeugma that you can find here.

For the various point levels you can score using zeugma while playing Scrabble, Words with Friends, and other games, check this out.

And below, our favorite Elizabeth Bennet of all time—actor Jennifer Ehle—reading from Chapter 43 of Pride and Prejudice in her car. Zoom ahead to the seven-minute mark to hear the two examples of zeugma in a single sentence, as quoted above: