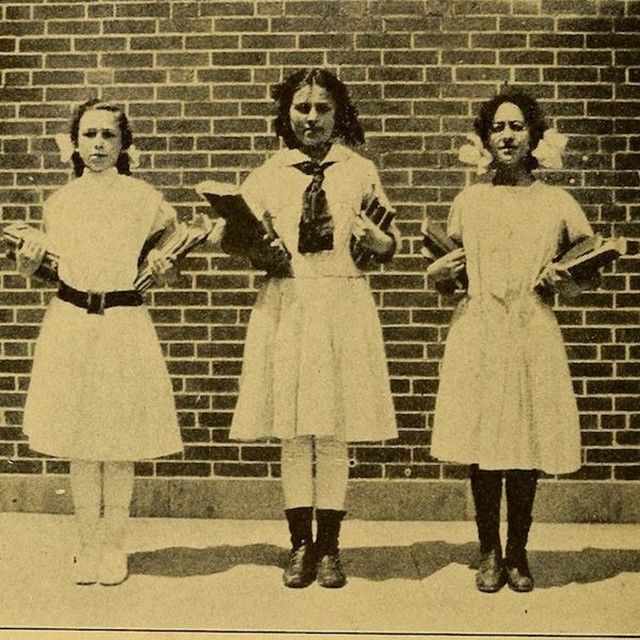 Thirty years ago, The Buckley School launched its flagship program and our founder Reid Buckley published his first book on public speaking. To mark the anniversary this year, we’ll be featuring instructional excerpts from that book—"Speaking in Public: Buckley’s Techniques for Winning Arguments and Getting Your Point Across"—sometimes edited or augmented with a few of our notes on his words. Above, three young women with excellent posture despite not putting their books on their heads, from The Library of Congress.

"They should rehearse their speeches with books on their heads. That sounds so silly I hesitate to mention it. But it works."

– Reid holding forth on how to instill better posture in speakers

From Chapter 10:
Into the Tank My Bullies! A Grab Bag of Useful Tips

Getting a Good Start

It clangs. One is summoned as to one’s doom, to rise from wherever one is seated and walk on stage, there to face three or four hundred people in the maw of a darkened theater. What first impression will those people conceive?

Spring up those three steps to the stage; do not drag yourself to the speaker’s stand. Once situated behind the lectern, facing the audience, remember:

The American slouch has no place on the platform.

If one’s body slumps, so will the audience. An attitude of fatigue will cause the folk out there to feel tired before one has opened one’s mouth.

Anatomy of a speaker

Everybody sooner or later evolves his characteristic carriage, which conforms with his personality; but in the beginning one should try to stand classically at ease behind the lectern.

Finding the public speaking posture that suits you

Nevertheless bear in mind: nothing that I say relating to posture should be taken as a recommendation to alter in anyone that manner of holding his body attractively peculiar to his or her type.

There is a way of standing peculiarly suited to stoutness, which is further back on the heels.

The short person, if she a la Better Midler and Goldie Hawn or he, a la James Cagney, possess a corresponding pugnacity, should by all means come on like a bantam cock, standing squarely on the balls of both feet, chest out and mitts ready.