Standing Up to Public Speaking Fears 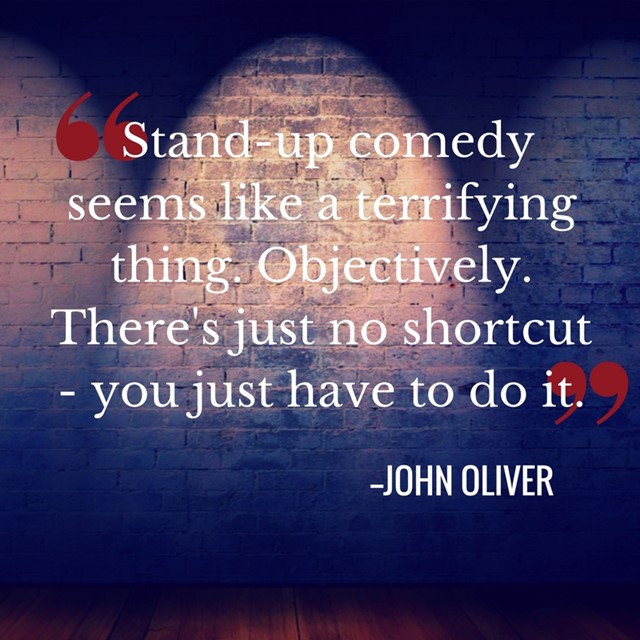 That headline did catch my eye. It’s hard to imagine anything more intimidating than jumping into stand-up comedy.

Her go-big-or-go-home approach was especially interesting to me. It’s a tactic I’ve used a few times. (Example: To overcome my fear of singing, I took voice lessons and performed solo at a recital. I still feel guilty about what I did to that poor audience.)

It’s also the opposite of the approach I took to deal with my public speaking nerves.

I often tell our Buckley groups how I struggled with my fear of public speaking when I worked for a television station. To improve, I signed up for the station’s speakers bureau and requested what I considered to be low-threat audiences—elementary school classes. Over the years, I worked my way up to older groups. I was still nervous, but less so because of steady practice.

Nardos Osterhart’s story is charming—and made me want to follow through on my sort-of-secret desire to try stand-up myself.

It also illustrates three things we try to convey in our Buckley School public speaking seminars:

Osterhart wanted to rise through the ranks at the hospital where she worked and knew public speaking was a critical skill. She also knew she was a nervous public speaker.

That desire to move into more demanding roles with her company is how she wound up trying stand-up comedy.

Many people we meet believe that other “more talented” speakers wing it. But when you read about the effort Osterhart put into developing her stand-up routine—from writing jokes, rehearsing delivery, learning from every experience—you see a great model for how to develop any presentation.

3. The audience wants you to succeed.

In the article, Osterhart says:

“I said everything way too fast but I got laughs and I got support, and I think that was the lesson for me. People don’t want you to fail. They are just as awkward as you are. They hope you are funny.”

We find that to be true most of the time, too. The audience wants you to succeed—because they can relate to the struggle, yes—and also for their own benefit. No one likes to suffer through watching an uncomfortable speaker or wants to endure a boring presentation.

It also helps to remember one of our other observations: People’s expectations of being entertained by business presentations are low. So if you give them anything even slightly amusing, they’re likely to relish it.

That might make them a little more eager to laugh than your typical comedy club audience--all the more reason to believe they’re primed to be a good audience.

To read the full article about the nervous speaker who became a stand-up comic, go here. For another account, see this article.

And below, a video clip that lets you see Nardos Osterhart making a fearless presentation: