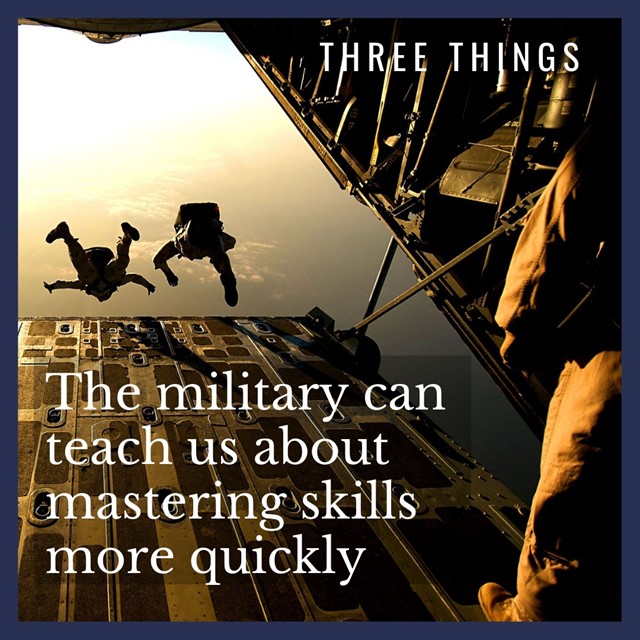 "You don’t get very far if you can’t learn how to do things in new ways."

"Learning new skills is part of the job."

"I don’t want to sound dramatic, but being able to get something quickly really can be a matter of life and death for us."

Over the last 30 years, we’ve taught communication skills to hundreds of members of the military and military veterans.

We’ve asked these men and women why they’re such good students. Above are some of the answers they give.

They’re quick learners, almost to a one. Clearly, they’re motivated. But how do they go about mastering new skills? What's different about their approach? What techniques do they use?

Here are three things we’ve observed that might help you:

1. They don’t waste time justifying the old way of doing something.

Sometimes you ask people to change the way they write or present, and their reaction is to tell you why they are doing what they do.

"I’ve noticed our military students are rarely defensive in this way," says Buckley coach Jenny Maxwell. "You can say something like, 'This sentence is hard to understand. Let’s find a different way to say it,' and they nod, take notes, ask questions, and start working to make the change."

Jenny says their approach has helped her improve the way she goes about receiving feedback herself. "Whenever I’m in a class or workshop now, I try to embrace the criticism or instruction and make notes, the same way. Really focusing on what’s being said keeps you open to what you can learn—and I see how that helps me improve my work so much more quickly."

2. They suspend resistance to the new idea. Even if they’re skeptical, they throw themselves into doing.

It’s not always easy to convince speakers they need to add energy or expression to their delivery. Serious people want to be taken seriously, from every walk of life, in every profession and industry.

Members of the military are no different. Yet, you won’t hear them say "I don’t smile," or "that’s not me" even when you can see on their faces that's what they're thinking. They try, then often surprise themselves with the positive results.

3. They expect to struggle and don’t get discouraged easily.

For speakers with solid skills and experience, even subtle changes can be hard to make. "We often hear it equated to trying to change your golf stroke," Karen Kalutz says. "People who were good speakers try to change an old habit, and it throws their whole game off."

"We also happen to work with a lot of overachievers, people with high expectations who are very tough on themselves," adds Karen. "That type of self-criticism rarely helps."

Most Buckley School students from the military are more comfortable with the struggle. They, too, have high standards—but they also expect a few stumbles before they master new skills.

"They aren't so quick to be down on themselves," says Jenny, "which makes learning easier. I've noticed that our military men and women are also quick to support and encourage others, so everyone in the group feels better about the discomfort that comes with learning new skills."

Two more notes about our experiences working with men and women in service:

Even though many have been in combat, jumped out of planes, or faced other tests that civilians can only imagine, military members still battle nerves when faced with public speaking. In other words, nervous speakers, take heart and forge ahead: The bravest among us feel your pain.

For any speaker, regardless of skill, as our founder would say--character always shines through. We see that, too. "Every time we work with men and women from the military, I’m impressed by their intelligence, sincerity, and work ethic,” Karen says. “As I’ve told them, it’s reassuring to know our country’s defense is in such capable hands.”