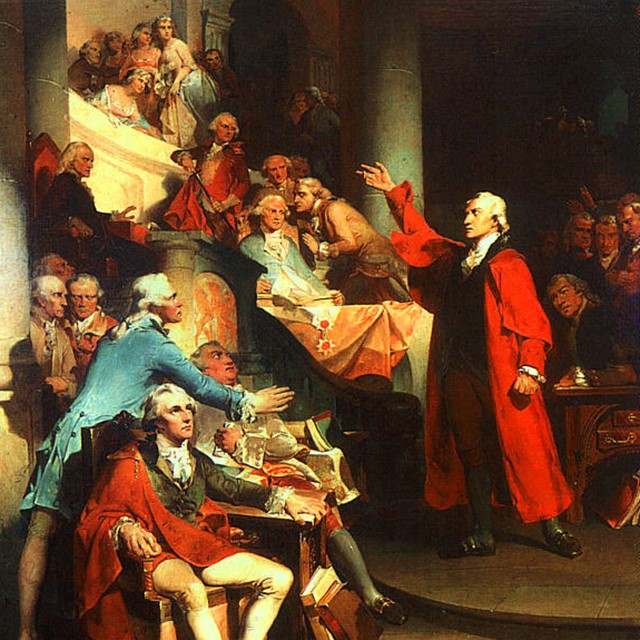 Patrick Henry depicted giving his speech to Virginia's House of Burgesses in 1765, in a painting by Peter Rothermel.

"Every word he says not only engages but commands the attention, and your passions are no longer your own when he addresses them."

March 23, 1775. Delegates to the Second Virginia Convention had gathered in Richmond, Virginia. Thomas Jefferson and George Washington were among the men there.

In his diary, Washington wrote of the weather that day: Cloudy & Chilly—with appearances of Snow—wind being Easterly but none fell. Afternoon. clear.

Inside St. John’s Church, however, the crowd was about to feel the heated call for an American revolution.

A 38-year-old former bar-keeper and self-taught lawyer was delivering a speech, one that would inspire Virginia to raise a militia 26 days before "the shot heard round the world."

"Give me liberty or give me death."

Nearly every kid who studies U.S. history has heard those words and has heard of Patrick Henry.

The true story of that speech, however, may never be fully known.

The version we read today was not written by Henry, but only first appeared in print in 1817 as part of a biography by William Wirt. In the 1970s, historians started to question how much of the speech was Henry, how much of it was Wirt.

Some have pointed out that Henry was known to use fear of Native American and slave revolts when he urged war against the British. The only first-hand written reporting on the speech says Henry used graphic name-calling that Wirt conveniently left out.

As he spoke, Henry held his wrists together as though they were manacled and raised them toward the heavens. "Forbid it, Almighty God! I know not what course others may take; but as for me, give me liberty"—Henry burst from his imaginary chains and grasped an ivory letter opener—"or give me death!" As he uttered these final words, he plunged the letter opener toward his chest, mimicking a knife blow to the heart.

We do know that Henry had quite the reputation as an orator, that he often spoke without notes, and that he learned some of his techniques by watching Presbyterian preachers when he was a boy.

He's also the source of "If this be treason, make the most of it," from his speech against the Stamp Act, given ten years earlier in Williamsburg to the House of Burgesses—another speech that was reconstructed after the fact.

By all accounts, he was an impressive speaker

While the words of Henry's speeches are up for debate, there seems more certainty about the impact his performance made on March 23, 1775.

Edward Carrington, who became a leader during the American Revolutionary War, listened to Henry from outside, by one of the church’s windows. He is supposed to have requested immediately afterward that he one day be buried on the very spot. (Thirty-five years later, he got his wish.)

George Mason, who drafted the Virginia Declaration of Rights, described Henry’s speech this way: "Every word he says not only engages but commands the attention, and your passions are no longer your own when he addresses them."

And though t-shirts and bumper stickers were not sported by the colonials, it appears that "Give me liberty or give me death" did catch on. According to History.com:

In Virginia, scores of colonials—many of whom had embroidered the words "Liberty or Death" onto their shirts—flocked to join local militias.

To think fully about Henry's stance on liberty—and the dramatic picture painted of him holding up his manacled wrists as he gave his speech—is to consider that he was a slave owner.

A Founding Father and governor of Virginia, Henry thought slavery was wrong, hoped for its abolition, and succeeded in changing Virginia law to end the importation of slaves. But that law provided no solution, nor did Henry free the enslaved people on his estate. When he died in 1799, he owned 67 slaves.

Henry's "Give me liberty or give me death" speech does have some lessons for modern day speakers:

To read Wirt's version of Henry’s speech, you can see this.