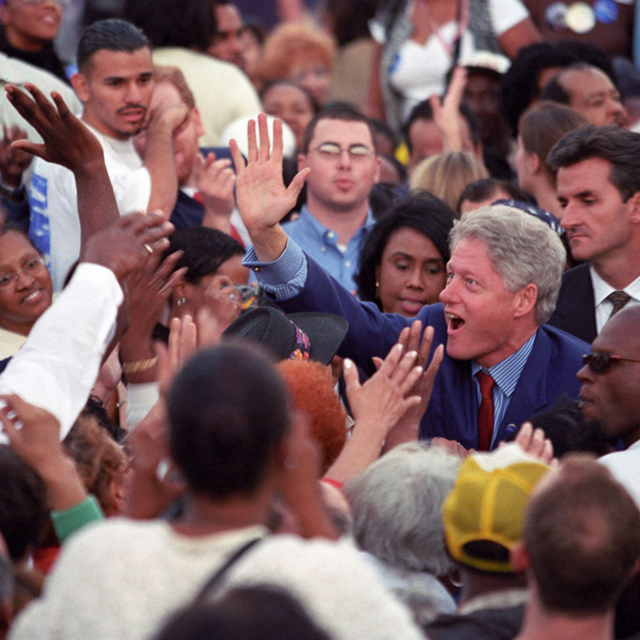 Of Bill Clinton's famous charisma, Buckley School founder Reid Buckley said after hearing him speak to a crowd: "I confess, I fell in love with the guy. He made me feel like I was the only person in the room."

"The truth is that charisma is a learned behavior, a skill to be developed in much the same way that we learned to walk or practice vocabulary when studying a new language."

Some people call it charisma. Our founder Reid Buckley felt this quality was more correctly called personal magnetism: "the ability to attract and mesmerize the attention of others," he writes in his book Strictly Speaking.

On the key point, however, Buckley and recent research line up: You don't have to be born with it. This is a quality that can be developed and coaxed from speakers, by paying attention to the elements that draw us to certain people.

A recent article in The New York Times tries to unravel the mystery of charisma by interviewing a number of experts and concedes that, in general, we're terrible at defining what exactly makes someone charismatic.

It seems we're a bit like Supreme Court Justice Potter Stewart who, you may remember, said of obscenity: "I know it when I see it."

"The magnetic speaker unites all the virtues—honesty, candor, decency, sincerity, passion—in a personality that commands attention anywhere, and from the podium, electrically."

That may be true, but we tend to think Reid gets closer to the heart of it with this observation:

"What's crucial to the effect is that he gives each individual the notion that nothing is so important to him as communicating with that individual. The Pope himself could be standing in the wings…a fire may break out, police come charging into the hall, ambulances hoot and clang: he (the speaker) will not notice."

Storytelling to develop your magnetic powers

If the good news is that a person doesn't have to be born with charisma to get some, then we arrive at the next question.

How does one develop it?

Dr. John Antonakis, a professor of organizational behavior at the University of Lausanne, suggests charismatic speakers share the same traits as master storytellers.

Like a raconteur or master orator, those who draw us in to the tend to speak with emotion and conviction, use voice and body language to bring their words to life, and know how to engage those around the with eye contact, colorful comparisons, and rhetorical questions.

"Basically put, charisma is all about signaling information in a symbolic, emotional and value-based manner," Dr. Antonakis told The New York Times. "Charisma signaling is all about using verbal—what you say—and nonverbal techniques."

"Aside from being humorous and engaging, charismatic people are able to block out distractions, leaving those who interact with them feeling as if time had stopped and they were all that mattered."

In that same New York Times article, the reporter also seeks out the author of The Charisma Myth for insights. Olivia Fox Cabane classifies the elements of charisma into three categories—those that help you exude confidence (power); those that help you create connections with others (warmth) and the practice of being focused on the moment (presence).

While this may help you think about your strengths and weaknesses in the charisma department, we wonder if there isn't a more holistic approach, at least when it comes to public speaking—something at The Buckley School we call becoming the servant of your message.

We recommend this approach to speakers struggling with nerves, but it is a sure way to build your repertoire in all three of Cabane's categories.

When speakers put their desire to communicate a message ahead of concerns about self, they come off as confident, committed to the audience, and present in the moment.

Those speakers also signal something we call humility of spirit, without which even the most magnetic speaker will come up short.

"The Devil may be able to fake humility of spirit; you can't."

While we may wish to be charismatic, we should be wary of seeming over-confident or self-satisfied as we strive to "own the room." We certainly see some charismatic speakers cross that line unintentionally in our sessions at The Buckley School.

In developing their ability to command an audience, Reid urged speakers to place the greatest value on humility of spirit.

He defined those traits for speakers as:

"Applause pleases him for the sake of his message," Reid writes, describing the speaker who has this quality. "He is awkward about compliments. He loathes public speaking."

So while Reid urged people to develop personal magnetism, he believed those seeking to increase it should look inside themselves. Some qualities, he cautioned, can't be projected solely by mastering better eye contact or descriptive body language: "The Devil may be able to fake humility of spirit," he said. "You can't."

For more on becoming the servant of your message, you might find this helpful.

Go here for a look at one of our favorite charismatic speakers.

For another take on how to increase your charisma (and as a byproduct, your public speaking skills), consider these six tips from Psychology Today.