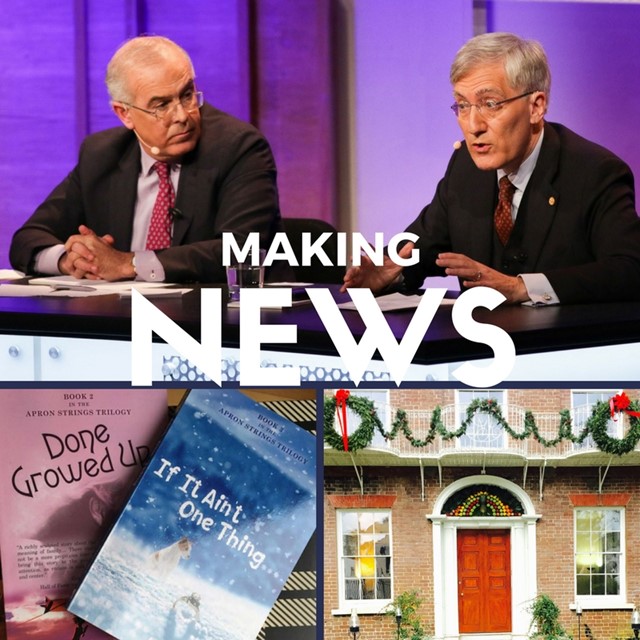 Winslow Hastie was recently named executive director of Historic Charleston Foundation. Winslow, a Charleston native, worked in preservation for the city of San Francisco before returning to Charleston. An excellent speaker with Hamilton-like abilities to make history relevant, he’s been with Historic Charleston since 2006.

We were in Charleston last week and snapped the pic above of this Historic Charleston property decked out for the season. Garden and Gun provides this insight into how Hastie’s organization approaches holiday decorating, if you’d like to learn more.

“Try to picture an activist for religious liberty….You’d be unlikely, I wager, to think of an amiable 30-year-old Mexican-American woman who sees herself as a defender of all religion.”

Earlier this year, another of our Executive Seminar alumni--Montse Alvarado—was named executive director of Becket. Montse has worked with the religious liberty law firm since 2009. Here’s a profile of her from The Wall Street Journal.

Congratulations are also in order for two writers who have published in recent months.

When Mary Morony attended our Executive Seminar for public speaking, she was hard at work on her first novel, Apron Strings. Last month, she completed what has become the Apron Strings trilogy with If It Ain’t One Thing. Mary lives in Charlottesville, Virginia, where she was born and raised—and draws on her personal experiences in these three novels.

Former Buckley School coach Barbara Beard also achieved a long-time goal with the publication of her children’s book Lammie Pie, Private Eye. The story was inspired by Barbara’s Boykin spaniel. The Boykin spaniel was first bred just outside of Camden, in Boykin, and is the state dog of South Carolina.

And look who's on the stage for an IQ2 debate:

Princeton Professor Robert George has served as a faculty member for The Buckley School’s Disciplined Thinking seminars. We were delighted to see him participating in a recent Intelligence Squared debate—which, by the way, is always a great source for excellent debates by interesting people on a variety of topics.