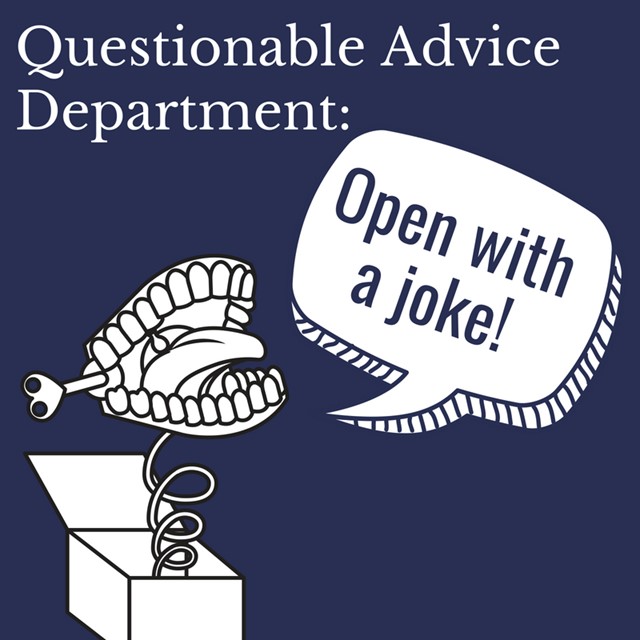 "The beauty of a canned joke is that it has usually withstood the test of time. For someone just starting to add humor, this is the best technique."

“I was thinking I’ll start with a joke.”

We meet a lot of people who either a) are convinced this is a great idea or b) believe they should start with a joke because “that’s what people do.”

Every once in a while, we even encounter a speaker who pulls it off.

But we discourage speakers from using canned jokes in their opens (or elsewhere) in speeches. Here’s why.

1. If you’ve heard it before, at least some of your audience probably has too.

That’s always a good thought to keep in mind when you are telling canned jokes—or canned stories, for that matter.

The very joke that delighted you when you heard it for the first time last week may be old news for half your audience.

Our least favorite is the joke used to “warm up” the audience, one that has nothing to do with the speaker’s topic.

Not only is that joke likely an old one, but it’s a time-waster. The audience will notice. At best, they’ll groan. At worst, they’ll develop a sudden distaste for the speaker.

2. You’re probably not a comedian—nor do you want to be.

“Never begin a speech with a joke. Not even if it’s funny. Nothing betrays the amateur faster,” writes Reid Buckley in Strictly Speaking.

We urge speakers to use humor, any time it’s appropriate, to build rapport and to make their presentations more engaging.

But a canned joke to open:

3. There are better ways to add humor.

Your stories, your experiences, your hilarious mistakes and misunderstandings—these can be much better material for making your point, engaging an audience, and building rapport.

The advantages of humor that comes from your personal experience are many:

Of course, some speakers have success with jokes.

As we say in every program, speaking is an art. Absolutes do not apply.

But, if you’re thinking of opening with a canned joke, we hope you’ll give it careful consideration. We’re willing to bet that you can come up with an equally good and original, if not all-out better, way to get the audience chuckling.

Imagine the audience naked? Approach the lectern as if it’s a red-hot cast iron skillet? Come across some public speaking advice you question? We’d love to know about it and weigh in (even if you got the advice from us), so send us an email!