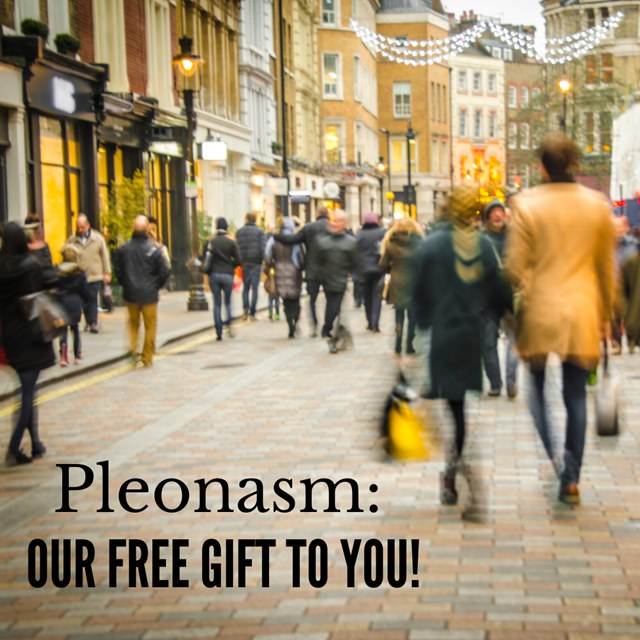 "We know we have a pleonasm when we can eliminate words without changing meanings."

– Arthur Quinn in "Figures of Speech: 60 Ways to Turn a Phrase"

If your usual custom on Black Friday is to look for an added bonus or free gift with purchase, you possibly might be fan of our rhetorical device of the month.

Pleonasms are those redundancies of speech we adopt either consciously or unconsciously in the pursuit of clarity or emphasis:

Some are so common we fail to notice them. Others are bad habits we might want to shake off. (Or simply shake, if you believe the "off" is clearly understood.)

Pleonasm, pronounced PLEE-uh-naz-um, comes from the Greek word pleon which, depending on your source, means excessive, abundant, or too much.

Anyone who's attended a Buckley School program will know we encourage speakers to cut the filler and fluff.

But is there a reason we might keep seemingly unnecessary words around?

Yes. Of course. For emphasis, for stylistic effect—and sometimes, for fun.

Let's start with Shakespeare, who's a little extra as he has Mark Antony describe the stabbing of Julius Caesar by Brutus as:

The most unkindest cut of all.

Or consider Isabel Allende writing in City of Beasts:

Or this bit from George Carlin's "Count the Superfluous Redundant Pleonastic Tautologies":

Based on her past experience, she felt we needed to join together in a common bond for a combined total of twenty-four hours a day, in order to find some new initiatives. What a novel innovation! And, as an extra bonus, she presented me with the free gift of a tuna fish. Right away I noticed an immediate positive improvement. And although my recovery is not totally complete, the sum total is I feel much better now knowing I am not uniquely alone.

So as you withdraw cash from that ATM Machine to start the holiday shopping slog, feel free to call it pleonasm and complain that it's déjà vu, all over again.

For more fun pleonasms and why you should take care about how you reference your neck, see this list.

For a copyeditor's take on the positives and negatives--and why some redundancies are so hard to catch, see this.