Rhetorical Device of the Month: Synecdoche 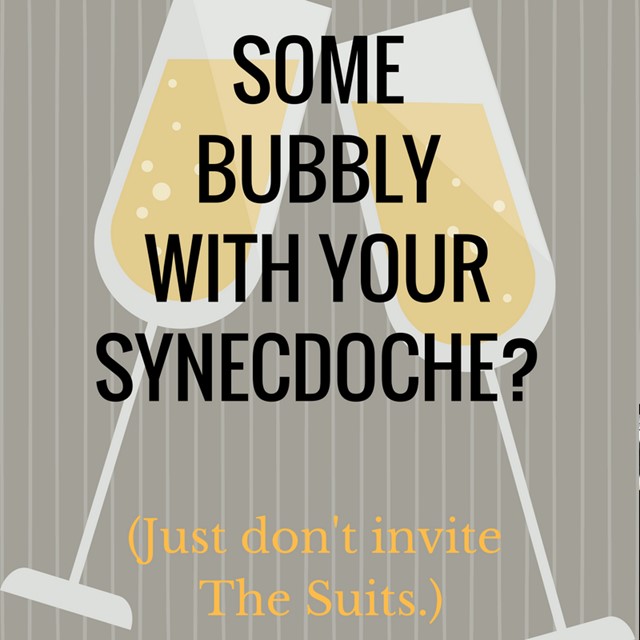 If you’ve ever referred to the U.S. executive branch of government as “The White House” or talked about an ad campaign “getting eyeballs,” you’ve used our rhetorical device of the month.

Synecdoche—pronounced Suh-NECK-duh-kee (think Schenectady)—is the practice of using a part to refer to the whole or the whole to refer to one of the parts.

Here are some examples of using the part to refer to the whole:

The reverse seems a little less common, but examples include:

Synecdoche is similar to another figure of speech—metonymy—though it can be hard to distinguish between the two (if you even care to make the distinction).

According to most definitions:

Synecdoche is using a part to represent the whole—or vice versa.

Metonymy uses something closely related to represent the thing it references.

That means “Suits”—a figure of speech we’ve heard quite a bit in the months around the British Royal Wedding—is an example of metonymy, not synecdoche.

Here’s the reasoning from the metonymy camp: Suits are not a part of the businessperson (like bubbly is an essential part of Champagne) but instead are an object closely associated with businesspeople.

We’ll leave you to debate that over a glass of bubbly with your rhetorical device-loving friends.

Meanwhile, we’ll be keeping an ear out synecdoche and metonymy in speeches and presentations—and anywhere else we hear these two rhetorical devices bringing color, symbolism, or conversational flair to messages we hear every day.