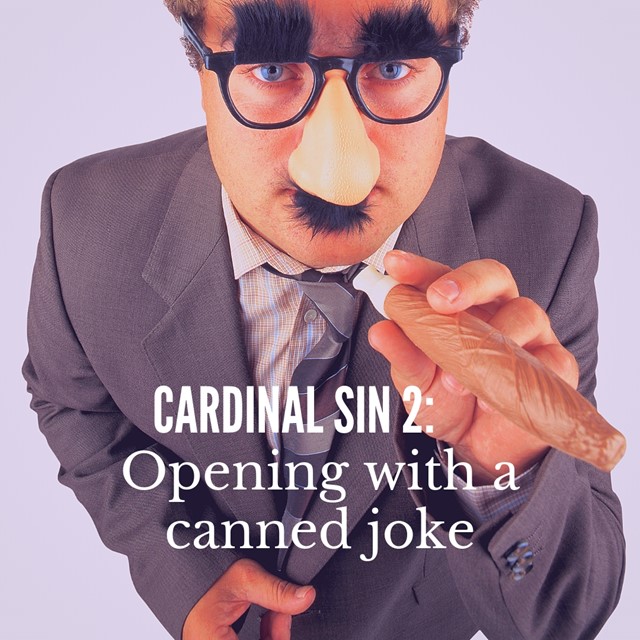 "Humor is often witty, but its proper tendency is to tell a story that reveals human beings in their sometimes endearing innocence."

Cardinal Sin 2: Never begin a speech with a joke.

Not even if it’s funny. Nothing betrays the amateur faster.

Forget Cicero. Don’t be so eager to ingratiate yourself. All you may earn is contempt. Get to your point directly. Lace your text with humor, sure, but let it boil up out of the text, uncanned.

Humor must be necessary to be legitimate. It must advance the argument. If your talk can get along without the anecdote (a humorous aside is different), let it.

An Example of Contriving Humor out of Necessity

It happens that I possess a nose that a Roman senator would envy—or maybe a toucan.

I’d had a skin cancer removed from its bridge one winter, necessitating a very large and protuberant bandage.

I had to go on lecture tour, and at the first two stops I became aware of audiences resolutely attempting to avoid staring. The effort produced great distress in these good folk as they went walleyed facing me.

Their preoccupation with my nose was getting in the way. So I confronted their secret thoughts, telling my audiences on the third night:

Big noses have played a significant role in my family since I can remember. My father had a patrician, his enemies said piratical, nose.

One afternoon in the late 1920s, John Pierpont Morgan was expected for tea. He was driving all the way from New York City to talk to my father about oil. Now he, Mr. Morgan, was endowed with the humongous humdinger of schnozzles.

Our mother was petrified, not by Mr. Morgan’s nose but by the reaction she feared it might kindle in her children.

Well, my older siblings did just that, to Mother’s intense relief. They bowed, curtseyed, and skedaddled.

Emitting a sigh—sugar tongs in one hand, cup and saucer in the other—our mother turned to her guest, asking, “And now Mr. Morgan, how many lumps of sugar will you have in your nose.”