Rhetorical Device of the Month: Dysphemism 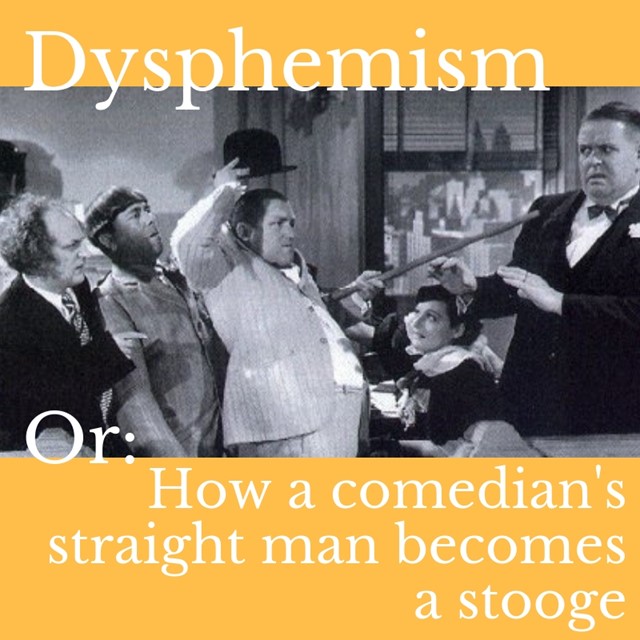 "Nowhere are they more common than in the argot of the greasy spoon (a dysphemism for the word "diner"), immortalized in the 1941 book by Jack Smiley, "Hash House Lingo". Toast was called a board or a shingle; tea was boiled leaves and coffee was mud; bullets were baked beans, and a steak, well-done, was a burned steer."

Perhaps you've used a euphemism in a speech, substituting a less offensive term to soften the impact of a message.

A dysphemism is the opposite: a harsher word substituted to jazz up, shock, or offend.

You may have used one of those in a presentation, too.

How does does euphemism's evil twin do its work?

Well, if you say your short teammate on the city league basketball team is "vertically challenged," that’s a euphemism.

But if you say “shrimp” when you’re trash talking the point guard on your cross-city rivals, that would be dysphemism.

As in, you’re dissing them. Or perhaps we should say, you’re dys-ing them.

Some dysphemisms are synecdoches—using the part to represent the whole: “You’re a butt,” for example.

For example, suppose you’ve been casually speaking with a group of people and using their first names—Larry, Curly, Moe.

Then you shift to addressing them as Mr. Fine, Mr. Howard, and Mr. Howard.

That shift, in that context, could be a way to express you displeasure with how The Three Stooges are poking you in the eye and twisting your nose.

“Stooge,” by the way, is a dysphemism for a comedian’s straight man.

Of course, dysphemisms are everywhere, making conversations, presentations, and speeches more colorful--bringing the fun in some cases, amping up the meanness in others.

One of our favorite, funny observations on this is made by way of the “Whiskey Speech,” given in 1952 by Noah “Soggy” Sweat. (Our faculty Glenn Tucker closes media training sessions by reading it.)

If when you say "whiskey" you mean the devil's brew, the poison scourge, the bloody monster, that defiles innocence, dethrones reason, destroys the home, creates misery and poverty, yea, literally takes the bread from the mouths of little children; if you mean the evil drink that topples the Christian man and woman from the pinnacle of righteous, gracious living into the bottomless pit of degradation and despair and shame and helplessness and hopelessness, then certainly I am against it.

But if when you say "whiskey" you mean the oil of conversation, the philosophic wine, the ale that is consumed when good fellows get together, that puts a song in their hearts and laughter on their lips, and the warm glow of contentment in their eyes; if you mean Christmas cheer; if you mean the stimulating drink that puts the spring in the old gentleman's step on a frosty, crispy morning; if you mean the drink which enables a man to magnify his joy, and his happiness, and to forget, if only for a little while, life's great tragedies, and heartaches, and sorrows; if you mean that drink, the sale of which pours into our treasuries untold millions of dollars, which are used to provide tender care for our little crippled children, our blind, our deaf, our dumb, our pitiful aged and infirm, to build highways and hospitals and schools, then certainly I am for it.