Rhetorical Device of the Month: Antonomasia 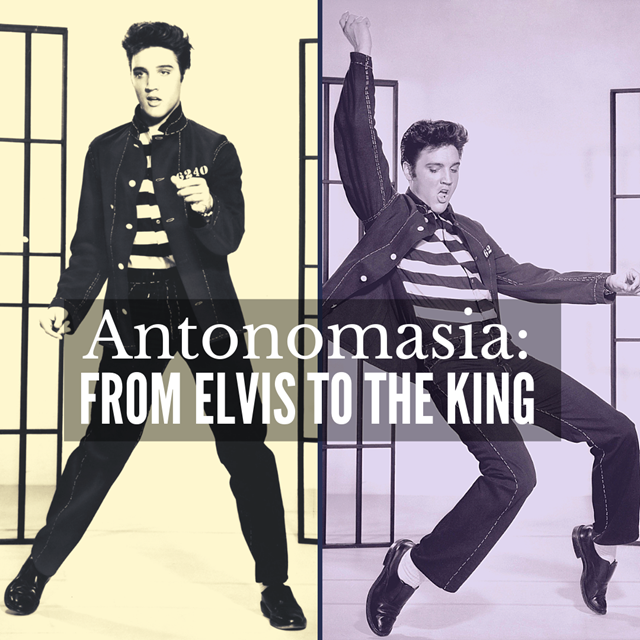 "When I eventually met Mr. Right I had no idea that his first name was Always."

When Donald Trump tweets "Mr. Appalachian Trail" to refer to a potential challenger, he's not only being Mr. Unpresidential—he's also using the rhetorical device antonomasia

Antonomasia is the fancy term for substituting a descriptor for the name of a person or place. Pronounced AN-tuh-nuh-MAY-juh, it comes from the Greek for "instead of name." It's considered a type of epithet.

Perhaps you've said "Good morning, Mr. Grumpy" or "Thank you, Ms. Morning Person" over your first cup of coffee. We use this device all the time, seemingly with ease:

Antonomasia is useful in a speech, because it can be a colorful and efficient way for you to give us more information about a person than their name alone can achieve. If you refer to plain old Jim as "Cowboy Jim," we get ideas about what Jim does and who he is. When you call the city of Charleston "The Holy City," you're giving us additional information about what we can expect to see there (hint: lots of church steeples).

And as you can see, antonomasia can not only convey the qualities of a person or place but also how you feel about them. Pushing that idea even further, it can be used as a verbal weapon—a stick, say, to poke them in the eye. Fans of the TV show Lost can tell you: The character Sawyer used antonomasia to get under the skin of everyone else stranded with him.

If you feel you've heard us mention this device before, perhaps that's because it's similar to metonymy. Here's what Andrew D. Hepburn wrote about the two devices in the Manual of English Rhetoric published back in 1875:

This trope is of the same nature as metonymy, although it can not be said to exhibit the idea more vividly. It consists in putting in place of a proper name another notion which may be either in apposition to to it or predicated of it.

Its principal use is to avoid the repetition of the same name, and the too frequent use of the pronoun. The most frequent forms of it are, naming a person from his parentage or country; as, Achilles is called Pelides; Napoleon Bonaparte, the Corsican: or naming him from some of his deeds; as, instead of Scipio, the destroyer of Carthage; instead of Wellington, the hero of Waterloo.

In making use of this trope such designations should be selected as are well known, or can be easily understood from the connection, and free from ambiguity--that is, are not equally applicable to other well-known persons.

While we’re not so big on calling Napoleon "the Corsican" for the sake of variation, we do enjoy using this rhetorical device for additional layers of expression it can add.

For examples of how to convert a dull description into more colorful antonomasia, see this.

For an extensive list of famous examples, look here.